Oh my. The title of this post reminds me of…

Yeah… Anyway. Y’all know that I’m a fan of Marguerite Kaye’s books, right? I mean, I think it’s pretty obvious. I’ve written about her books here, here, here, here, and here. (And probably a few other places besides.) I choose to delude myself with the pretty lie that she’s actually writing these books for me. I’m totally her target audience, after all. I go nuts for heroine-centric historical romance that’s on the serious side, and Kaye’s releases over the last few years (from, say, 2012 on) have consistently delivered my reading catnip.

Kaye has a new release out this week, and it’s a little different from her recent books. [Update: turns out, I’m a trifle precipitous here… the book will be released on March 1. Three cheers for preorder?] 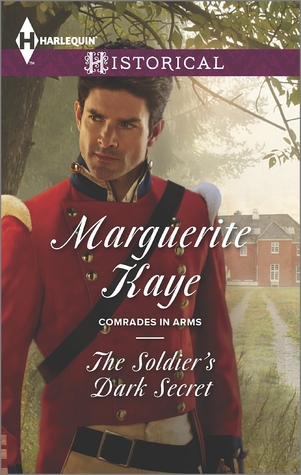 The truth behind the hero Officer Jack Trestain may have been one of Wellington’s most valued code-breakers, but since Waterloo, he’s hung up his uniform. If only he could just as easily put aside the tortured memories he carries deep within; Perhaps enchanting French artist Celeste Marmion might be the distraction he so desperately craves?

Except Celeste harbors secrets of her own, and questions that she needs Jack’s help to solve! With Celeste’s every touch an exquisite temptation, how close can Jack get without revealing his darkest secret of all?

Look, it’s not every day that I sympathize with Lydia Bennett, but can we talk for a second about that guy’s regimentals? And maybe his jaw, too. Damn!

You can tell from the cover and title of The Soldier’s Dark Secret that it isn’t exactly my heroine-centric catnip. This book is very much the story of its hero. Don’t get me wrong: I still loved it, but that’s mostly because Celeste is a well-wrought character whose story gets you in all the feels even though it gets less page time overall and is much more subtle. But you should probably take me with a grain of salt, here. I suspect I’m an atypical reader in that it’s usually the way the heroine is handled that makes me love (or hate) a book. I’m all for great heroes, of course, but they’re not usually the focus of my attention. I’ve noticed, in conversation with other readers, that my perspective might be considered unusual.

Jack has returned from Waterloo with what modern readers will easily recognize is a nasty case of PTSD. Kaye does a remarkable job of blending this fraught issue (terribly fraught for its time — after all, it’s not as though Regency era England is known for its compassionate response to mental illness of any sort — and fraught for our current time, as well… let’s be honest: we just barely do better (if at all) at responding to these types of war injuries.) in the story without it becoming an issue book. It’s just part of Jack’s character, and he has to learn to live with it.

Celeste is a French landscape artist with a mysterious past, and most of the plot is devoted to uncovering that mystery, but it’s Celeste’s internal journey from complete emotional disconnect — her entire childhood lives in a memory box labeled “DO NOT OPEN” — to integrated emotional health that is (to me, of course) the most interesting thing about the book, especially because it so neatly balances Jack’s more outwardly dramatic journey. Let me see if I can explain what I mean… Jack’s journey is more obvious. He’s kind of a wreck at the beginning, falling apart all over the place, suffering nightmares and consequently not sleeping, losing time, utterly lost. His family is all up in desperate denial, and things don’t look good for the future. Then Celeste arrives and gives him a purpose — solve this mystery! — and he starts putting the pieces back together again. (As an aside, I think this book will resonate with a lot of readers, because the wounded hero who gets his shit together trope seems to be pretty dang popular.) By contrast, Celeste starts out contained and competent, happy in her little life and independence; as her mystery unravels and she explores her grief, readers and Celeste alike discover that she never was all that happy and, after a bit of emotional upheaval, she realizes that happiness does not lie in a life of emotional sterility but that, to live truly, she needs to love.

So, those of you who know me personally should be smirking right about now. (I’m not exactly known for my emotional connectivity.) And maybe that’s why Celeste’s story resonated so strongly with me… Who knows? Either way, I fell in love with The Soldier’s Dark Secret because it asks such interesting questions about emotional health, grief, guilt, shame, and — especially — love. But I think a slew of other readers will enjoy it because Jack is seriously swoony (also strong and hot).

So, yeah. OK, I know I already talked about this one a little bit (if rather obliquely) in my 2014 historical romance favorites post, but… I have more to say, and now that it’s been out a few months, I’m less concerned about dropping spoilers left and right. Sooo… you with me? Goody.

The secrets behind the wedding veil 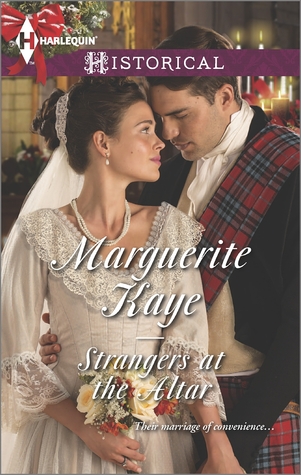 For penniless widow Ainsley McBrayne, marriage is the only solution. She’s vulnerable yet fiercely independent, so shackling herself to another man seems horrifying! Until handsome stranger Innes Drummond tempts Ainsley to become his temporary wife.

Once married, Ainsley hardly recognizes the rugged Highlander Innes transforms into! He sets her long-dormant pulse racing, and she’s soon craving the enticing delights of their marriage bed. She has until Hogmanay to show Innes that their fake marriage could be for real.

I hate to say it, but I kinda hate that blurb. I think it’s the exclamation points (and the fragment… and the idea that her pulse has actually been long-dormant. That’s just unhealthy.) Also, what the hell is Hogmanay? I read the book, and I have no idea…. I feel better having gotten that out.

I tend to get excited about marriage of convenience (MOC) books, because.. well… OK, to be honest, it’s because they tend not to rely so much on instalust. They don’t need it to explain why these characters are suddenly spending so damn much time together. (I like friends-to-lovers and second-chance stories for the same reason.) But! Good MOC stories also show characters having to learn how to make it work, how to wiggle around in a relationship with the highest stakes possible (especially in a historical romance). And that can be a fertile ground for a lot of really interesting stuff.

Anyway, in Strangers at the Altar, Kaye brings together an agony aunt (that’s an advice columnist on this side of the pond) and an engineer, each opposed to marriage for compelling reasons yet compelled to marry nonetheless. And — you guys — the meet cute at the lawyer’s office is so fantastic. Innes and Ainsley start out strangers, to be sure, but friendship (and, through it, romance) develops between them. Innes helps Ainsley in writing her advice column. (Those scenes are some of my favorites in the book, along with the scenes between Ainsley and her friend (and publisher) Felicity.) And Ainsley helps Innes make progress with his estate and its people. (He’s reluctant to accept that help, of course, but her outsider’s eye and creative problem solving pretty much save the day. Go Ainsley!)

Together, Ainsley and Innes muddle through their issues and complicate their friendship and marriage with intimacy. As in all the best MOC stories, the scenes wherein the characters adjust to changes in their relationship and/or new things learned about each other carry such tension, such gravity from their married state. (Even among these characters, who plan to part ways after a year.) There is more than just attraction keeping the characters together, and the stakes are high. There’s some delicious drama in their relationship and conflict, and the denouement is just stellar (so, so much groveling. I loved it. LOVED. IT.).

Strangers at the Altar feels heroine-centric to me, mostly because Ainsely is awesomesauce. Innes is a great character — don’t get me wrong — but he can’t compete with Ainsley in my book. And that’s probably because I’m just much more sympathetic to heroines than heroes. Ainsley’s troubles seem more grounded in reality, and what ails her — her financial insecurity — is ubiquitous to almost all women at the time. She has had to deal with first her father then her husband making terrible financial decisions for her, and she has been left to pick up the tab and shift as well as she can. That’s an age-old story, and it feels powerful to me because there’s just so much truth there.

In comparison, Innes’s story seems almost contrived (I mean, it’s actually no more contrived than Ainsley’s story… it’s all fiction, after all, but it’s a much less universal story.). He’s reeling, 14 years later, from guilt and grief after the death of his twin and anger at his father for being such an asshat. Innes leaves (is exiled) the family home and goes out into the world to become an engineer with a penchant for bridge design. I’m pretty sure there’s a metaphor there.

Anyway, what I really wanted to talk about is the book’s lack of a magic baby epilogue. For you genre romance readers out there, how many times have you read a book that features infertility as a plot point or conflict and is resolved by a magic baby epilogue? Countless times, amiright? Our cultural norms of relationship happiness, that 1 + 1 = 3 and that dating leads to marriage and marriage leads to babies, have a strong foothold in genre romance, and it’s a rare book that leaves the fertility question unresolved (or resolved in decided infertility). Strangers at the Altar is one of those rare books that implicitly argues that it’s still “happily ever after” even when not everything is lined up all perfectly right and tight. (That, perhaps, “happily ever after” doesn’t have to include lack of sleep, fighting over conflicting parenting styles, worrying constantly that your little human will turn out to be an asshole, and never having a moment to yourself. Come to think of it, much as I love my children — and I really do — a baby-free “happily ever after” seems much more romantic to me.)

*FTC disclosure – I received e-galleys of both books from Harlequin via NetGalley in exchange for review consideration. My opinion is my own.* (Further disclosure — I think Marguerite Kaye is boss.)