Hi again! So a couple of months ago (or something? Whatever. Some time ago. Any mention of time gets really complicated when it takes me months to write a damn post.), I saw a series of tweets from Charlotte Stein about how much she loved Magic Mike XXL. I was particularly struck by these:

And even more revelatory: when the guys talked amongst themselves they never once said shitty garbage. Not. Once.

We have so been taught to expect male friends onscreen to talk trash about women that it actually astounded me to see them not.

(I mean, sort of as an aside, I think your life is missing something if you’re not following Charlotte Stein on Twitter. She’s magical.) Anyway, these tweets struck me because I’d read and was sort of mentally circling Jessica Clare’s latest billionaire release, and they helped me identify an element about the book that I found both fascinating and a little problematic. 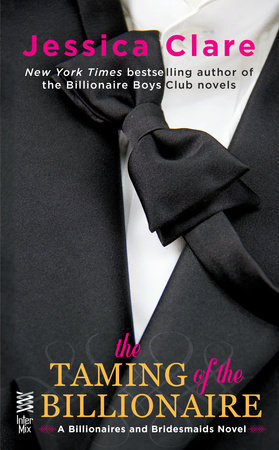 Edie’s an overbearing cat behaviorist who’s not big on people. Magnus is a newly-rich game developer who likes to be in control. When the two of them meet at Gretchen and Hunter’s masquerade engagement party, the loathing is mutual. Unfortunately for them—and everyone else—they’re in the wedding party together and must deal with each other for the next few months.

But when Magnus’s younger brother falls for Edie’s sister, he begs for his brother’s help in concocting a plan to win her over. If Magnus can keep the prickly Edie occupied, his brother will have time to woo Edie’s sister. Of course, Magnus isn’t interested in the slightest, but Edie is…intriguing. And stubborn. And smart. And sexy. And they might have more in common than they thought.

Before long, it becomes a challenge between the two of them to see who will be tamed first. But how’s Edie going to react when she finds out that Magnus is using her? And how’s Magnus going to handle the fact that he’s fallen for a cat lady?

I had to read this book, you guys. It had me at Shakespeare, of course, but there was the also the promise of Gretchen (one of my favorite romance heroines of all time) and the cat lady thing. And it totally delivered on all three fronts — as a Taming of the Shrew adaptation it worked almost as well as Ten Things I Hate About You (my favorite adaptation…); there was definitely a lot of Gretchen in the book, and she was as sassy and balls-to-the-wall as I’ve come to expect; and cats ended up figuring prominently in the plot of the book — but the meet cute very nearly derailed the whole thing.

Before Edie is introduced to Magnus, she overhears him and a few of the other groomsmen talking shit about the bridesmaids (dishing on their relative fuckability, basically), and she takes an instant dislike to him both because it’s just a shitty thing to do and because he makes a snide comment about cat ladies. Don’t get me wrong: I’m a Pride and Prejudice fan, and I like the heroine overhears the hero saying something objectionable and takes an instant dislike to him trope as much as anybody. My beef with this particular meet-cute is that Magnus acts in a decidedly unheroic manner (although not nearly as unheroic as the other douchebags in the scene), and that makes it really hard to root for him later on. (Actually, let me interrupt myself again… it’s entirely possible that Clare will make some of those other douchebags the heroes of their own books at some point, so it’s not just a question of Magnus’ being unheroic… I’m wondering if we’ve got an entire series built around — or at least involving — douchey heroes. Anyway, I guess that’s a worry for the future.) There’s a world of difference between “She’s tolerable, I suppose, but not handsome enough to tempt me” and “Shut the fuck up…Or I’m gonna insist you hook up with the cat ladies. Just don’t get them too excited or you might end up with a hairball on your–”

I’m hesitating on letting that paragraph stand, by the way, because I’m not 100% certain that I wouldn’t love, just for the sake of its being subversive, a story that centered around a heroine who behaved pretty much the way Magnus does at the beginning of The Taming of the Billionaire. It feels different to me because Magnus isn’t being subversive here… he’s behaving exactly the way I’ve been culturally conditioned to believe all men behave in groups when isolated from women (or when interacting through the buffer of the internet, perhaps). But, honestly? This seems like lazy characterization, and that’s why it bothers me (beyond the obvious that it confirms and perpetuates a ridiculous gender myth; sure, the book seems to say, all men are douchebags, but only until they meet the right cat lady.). This is a Taming of the Shrew adaptation, so there has to be some antipathy between the main characters, and I would have liked it so much more if that antipathy were more complicated than the inherent conflict between a douche-canoe and a cat lady.

(It’s possible that someone out there is still wondering why 10 Things I Hate About You is my favorite adaptation of this story. It’s probably got more to do with my age than anything, but (and I just re-watched it) it still strikes me as funny and interesting and manages to balance its more questionable elements with some unexpected social analysis. I do wish that there were more groveling at the end, but I pretty much always want more groveling.)

Anyway, back to The Taming of the Billionaire… While I was tempted to give up on the book after the inauspicious

meet cute, I’m glad I stuck with it. It features perhaps the grandest (certainly the most cat-filled) romantic gesture I’ve ever come
across in a romance novel, and it has all the groveling I could ever want. I’m going to keep reading Jessica Clare’s billionaire stories. Among the veritable horde of such stories, hers stand out for humor and a batch of truly badass heroines who are (for me) the antidote to all those stories about PAs who are swept away by money rain and terrible behavior. Bonus, as of this posting date, The Taming of the Billionaire is $0.99. I’d jump on that if I were you.

*FTC disclosure – I received an e-ARC from the publisher via NetGalley for review consideration. My opinion is my own.*