I’ve been looking forward to this book for months, and I clapped my hands and did a little dance when I saw it listed on NetGalley.  Honestly, Rumors that Ruined a Lady had me at opium. 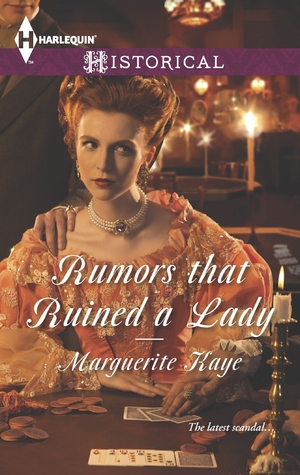 Cover image, Rumors that Ruined a Lady by Marguerite Kaye

The publisher’s blurb, courtesy of Goodreads:

Amongst the gossip-hungry ton, no name has become more synonymous with sin than that of Lady Caroline Rider, cast out by her husband and disowned by her family. Rumour has it that the infamous Caro is now seeking oblivion in the opium dens of London!

There’s only one man who can save her: notorious rake Sebastian Conway, Marquis of Ardhallow. Soon Caro is installed in his country home, warming his bed, but their passion may not be enough to protect them once news of their scandalous arrangement breaks out.

I flat out loved this book, and I have a lot of reasons.

What I loved best, though, is that this book deals with some pretty heavy subject matter (spousal abuse), but it doesn’t sensationalize it in any way.  The references to Caro’s abuse are sufficient to carry the point that her marriage is awful, but the story remains focused on Caro and Sebastian and what they will do moving forward.

(Tangent: One of the awesome Vegas conversations — that I participated in only slightly, but it got me thinking — was about rape in literature, that there seems to be a (disturbing) trend of authors forcing their lady characters to endure some pretty harrowing shit in order to have appeal as “serious” characters.  I’m not sure whether authors are doing it on purpose or if it’s just a consequence of our culture (?), but it’s troubling on so many levels.  Those types of experiences as recounted in literature are simultaneously trivialized (because we — the collective audience — are consuming them for entertainment) and sensationalized (because these fictional experiences have to be powerful enough to register with readers), and the result is simply too disturbing for me to get into right now.  Let me know in the comments if you’re interested in my expanding on this tangent in a future post. /tangent)

To go back pre-tangent, I also loved that Caro was never a damsel in distress (except at the opium den, I suppose) and that she helped Sebastian just as much as he helped her.  (Also, isn’t it seriously ballsy for a romance novel to have a heroine who’s married to someone else?)

I’ve been trying to tread carefully in this review to avoid spoiling the story for anyone.  The fact is that I want everyone to read Rumors that Ruined a Lady and then talk about it with me (and anyone, really).  I want to know if there are other readers, like me, who want books that deal with some of life’s darker elements but still recognize that a happy ending (and love) is a valid one.

Stay tuned tomorrow, because I’ll be hosting Marguerite Kaye on the blog to talk about the difficult path to happily ever after.

*FTC Disclosure – I received an e-galley of this book from Harlequin via NetGalley in exchange for an honest review.*