I know. It’s been a hot minute. What can I say?… I have a bunch of posts in draft, but I got stuck on one of them and… yeah. Stuck. I might finish writing it at some point, but in the meantime… I read a book. (I mean, really… since my last post, I’ve read a few hundred books, but… whatever.) I important bit is that I read a book that I felt like writing about, and I actually managed to make it happen. If you’ve ever had 18 months of writer’s block, like me, you know how momentous this feels. 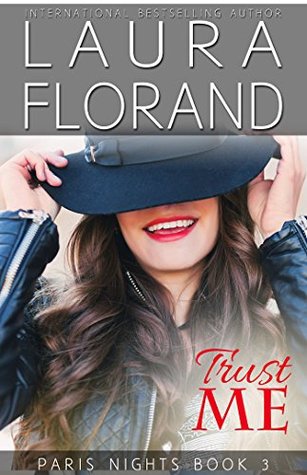 She’s nobody’s damsel in distress…
Top Parisian pastry chef Lina Farah is used to fighting for her success. But when a violent attack shatters her security, she needs a new tactic to battle her dragons. What better way to banish the monsters under her bed than by inviting a sexy SEAL to tangle the sheets?

He’s a professional dragon slayer…
Elite operative Jake Adams has never stayed in one place long enough to form a lasting relationship. Lina’s fire and beauty tempt him to give her the hot affair she craves. But her spirit and courage make him long for more. Can he convince a woman seeking forgetfulness to dream of ever after…with him?

Laura Florand is one of my favorite writers in Romance and the author of a few of my favorite books. (The Chocolate Touch and All for You are my favorites of hers.) So I was really happy to hear that she had a book out this week, and I read it right away. And then I read it again (because that’s how I roll).

Trust Me occurs kind of in the middle of the action of the second book in the Paris Nights series, Chase Me. It brings together coworker/best friends of the main characters from that book, and I really think it would help to have read Chase Me if you’re planning on reading Trust Me. When I say it occurs in the middle of the action, I’m not overstating things. The violent attack referenced in the book’s blurb occurs in that book. (Bonus: Chase Me is really fun, violent attacks notwithstanding.)

Anyway, I was happy to have Lina get a book, because she’s super awesome. And, while his character is a lot slower to build than Lina’s, Jake ends up being a pretty decent match for all that awesome. I loved the freckles. And he’s got a pretty great smolder thing going on.

It used to be that the Kindle app on my phone would display a ticker at the bottom of the page, letting me know my reading progress. And then one day it disappeared, and I haven’t taken the time to figure out how to bring it back. But usually I don’t need it. I don’t mean to brag, but I read enough romance novels that I can usually guess where I am in a given book. Are things going great? It’s probably about 50%. Are things edging towards conflict? Probably about 75-80%. But a strange thing happened while I was reading the book.

I was happily reading Trust Me and guessing that I was about 50% through, and it felt right. Things were going well after a slightly bumpy beginning, and I was just starting to wonder what the conflict was going to end up being (there were hints here and there of possible conflicts, whether about their conflicting professions or their mutual relative inexperience with relationships) when the book ended. Like, Fin. The End.

And now I actually feel bereft.

The thing is, I think conflict is really necessary to support a believable happily ever after. (Also, it keeps things interesting. Just saying.) Any halfway decent love story (whether it’s in a book or from one’s own life) is, in some way, about how that love has overcome some obstacle. In our lives, it’s probably more common for the obstacles to be internal — can so-and-so ever learn to trust, maybe, or can these crazy kids learn how to use their words to communicate — but sometimes they’ll be external, too — anybody got a story about their love overcoming obnoxious family resistance? In a romance novel, the obstacles can be anything from the mundane to the outlandish, but there’s always something. There has to be a conflict!

Trust Me ends with an epilogue-like final chapter, so it’s not like the book doesn’t have an HEA (and it’s definitely happily ever after rather than happily for now. These two are committed by the end.). It’s just not a satisfying ending, because it doesn’t triumph over any odds. Far as I could tell, these characters didn’t slay any dragons (or, more accurately, they didn’t slay them together. More like they both individually realized that their dragons weren’t that big a deal, and then they shrugged and moved on.).

It’s like this story: two people met each other, flirted a bit, started a relationship that had a misunderstanding at its core, pretty quickly resolved the fairly mild misunderstanding, and then decided to make forever out of things. The end.

(I feel like the answer to that question is always going to be yes… but whatever.) Anyway… I leave you with a French cat.

5 thoughts on “What’s conflict got to do with it? – Trust Me by Laura Florand”