In one of my recent(ish) email exchanges with Marguerite Kaye (who, in addition to writing some
of my favorite historical romance novels, is a fabulous correspondent), I mentioned that I wanted to start a new series of posts on my blog called musey thoughtsies, places where I or any guest posters could ramble on about whatever. It was just starting to get hot where I live, and there had just been a fire, and I

rambled on in my email about the impact of my home climate — drought-riddled chaparral — on my ability to sojourn in green lands. I spent a week in Ohio over the summer and found it claustrophobic: so much green growth reaching up to the sky and clouds reaching down, enclosing all around.

Anyway, Marguerite encouraged my musey thoughtsy idea, because she’s made of awesome. On Friday I’ll have her on with a guest musey thoughtsy about never-ending rain (something I can’t comprehend at all). But for now, I want to talk about her most recent book. 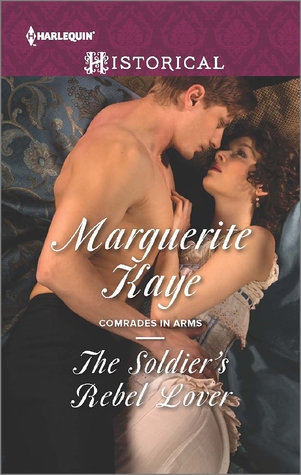 When Major Finlay Urquhart was last on the battlefield, he shared a sizzling moment with daring Isabella Romero. Two years later, Finlay has one final duty to perform for his country, one that reunites him with this rebellious senorita! Except Isabella has her own mission, which means that no matter how much she craves Finlay’s touch, she can never tell him the truth. But she’s underestimated Finlay’s determination to protect her, and soon she finds herself letting her guard down, one scorching kiss at a time!

God, that cover. It’s grown on me a little bit, but I can’t help but wonder exactly how uncomfortable that model was. Corsets aren’t comfortable when you’re vertical, but they’re about forty times worse when you’re lying down. And then having to be nose to nose with another model, trying not to breathe in his face when you can barely get a good breath anyway… It must have been awful. I guess it’s a good thing that I’m not part of the decision-making process for any covers, because I’m pretty sure I’d find something to complain about every time. Anyway… the book.

I opened The Soldier’s Rebel Lover with high expectations. There’s a good reason that I write about Kaye’s books so frequently on this blog (pretty much every time a new one comes out). They sing to my soul. It’s like she starts with an idea of a heroine, usually someone interesting and a little bit different and beset by a problem that I recognize, and then she builds the story around her.

Be honest: how many times when reading historical romance do you get the sense that the story was built around the heroine? Not often. It’s the heroes who are usually at the focus of both the narrative and our attention. As readers, we want to fall in love with the hero, and all we require from the heroine is that she be worthy of her hero, whatever that means, and not too “difficult.”

Kaye’s interest in her heroines — and through them her readers — and in the issues that impact those heroines — and continue to impact her readers (and herself) today — shines through her writing, even when she’s trying to write a series that is hero-centric. I still feel like what she’s really trying to do is to tell my story, to make sense of my world. And, selfish being that I am, I find that I love the experience.

The Soldier’s Rebel Lover continues the Comrades in Arms duo. (In case you’re interested, I talked at some length about the first book here.) From its opening chapters, it clearly establishes itself as a hero-centric tale. Major Finlay Urquhart, at a crossroads in his life after years of war, answers the call of friendship and duty and travels to Spain to locate (and secretly facilitate the escape of) a mysterious partisan. I knew going into it that the book would be focused on Finlay (Marguerite had warned me), and it was… until Isabella was introduced.

I mean, take me with a grain of salt… maybe the book actually stays focused on Finlay, and I am just so heavily biased in favor of women characters that I ignored him. (It’s absolutely possible, even likely.)

Anyway, Isabella is glorious. Like so many of Kaye’s heroines, she’s complex rather than simply worthy. During the years of war, Isabella found the sudden freedom to expand beyond the confines of a woman’s life. She helped her father run a partisan network and later took over its operations after his death. After the war, when all the men returned home and picked up their old lives, Isabella found herself in an uncertain situation. Her brother married, and she found her place at home usurped by a sister-in-law with whom there was little common ground (seemingly).

The romance that develops between Finlay and Isabella is balanced rather nicely. To start with, both are wary. (To start with, I was wary, too. I’m not entirely comfortable with secrecy and conflicting agendas in my romance reading. Happily for me, the veil was soon lifted and honesty restored.) There are, of course, barriers to their romance. It wouldn’t be a very interesting story without barriers, intrigue and suspense notwithstanding. Finlay and Isabella each grapple with identity and vocation (a neat parallel, I thought); Finlay has the additional concern of, you know, having been sent by his government to silence Isabella — can he pursue a relationship without being drawn up for treason? Everything was on track, despite the surprising foray into romantic suspense territory, until the end.

Let me see if I can explain. While I felt that Kaye’s sympathies were clearly with Isabella, her arc is not quite as compelling as Finlay’s because her conflict (such as it is) resolves itself well before the end of the book. From that point on, poor Isabella has to take up Finlay’s conflict and deploy it against herself. I didn’t actually mind that at all, while I was reading it, because Kaye’s writing in those sequences is absolutely on point. However, near the end of the book, Finlay abruptly throws away his own sources of conflict — and therefore Isabella’s as well — and the result is a resolution that doesn’t feel all that resolved. I’d just spent however many hours reading the book, watching all this lovely structure get built scene by scene, and then Finlay just decides to raze all that and sail blissfully into a happily ever after as though there were no real conflict. Thanks to Eddie Izzard, I call that sort of thing an etch-a-sketch ending (think Northanger Abbey). It’s not all that pleasant an experience to watch several hours’ worth of entertainment and thought get erased with one hearty shake.

That said, Northanger Abbey is one of my favorite books because not even the most etch-a-sketchy ending could eradicate the lasting joy I experience when reading it. Catherine’s nearly wise naiveté, Henry’s excessively wonderful charm, and the narrator’s irony linger, despite that wretched ending. And the same is true (for me) of The Soldier’s Rebel Lover. It may not be my favorite of Kaye’s books (that honor belongs to both Strangers at the Altar and Unwed and Unrepentant, tied in my affections. I love those books.), but…

OK, ready for a tangent? (Your answer should be, From you? Yes. Always.) There’s a similarity between the conclusion of this post and my last. In both cases, I read the recent release from one of my favorite authors, compared it to my favorites of her books, and, at least in the last post, left it at that. But now I’m wondering… The thing that happened to the conflict at the end of this book… I might not have noticed that if I hadn’t raised the bar another notch in my expectations before I even read a word of it. If I weren’t so familiar with Kaye’s voice and storytelling, would I have noticed the structural problem? Maybe not — maybe I would have been so taken by the things that are awesome that I now take for granted (such as Kaye’s compassion for her secondary characters, especially the women, and her careful avoidance of the catty rival trope).

Let’s talk in the comments or on Twitter (or, you know, in my imagination): Do you run into issues with your expectations when reading a book by a favorite author? How do you manage expectations?

*I received an e-arc from the author for review consideration.*