So, I think by now it’s clear that I love me some Charlotte Stein. I love her books. I love her Twitter feed. I have aspirational thoughts sometimes — usually when I’m in the middle of one of her books — that I’ll overcome my intense dislike of travel and just, like, show up at her house (somehow) and… ? I usually stop there. Even I can’t think, despite my being rather charming in a painfully awkward kind of way, that my turning up at someone’s house unannounced could be anything but creepy and terrible.

(By the way, I’ve just revealed a grim truth: my aspirational thoughts deflate rather quickly under the pressure of my practical mental habits. Ask me about my hopes and dreams sometime, and you’ll see just how drab my mental landscape can be.)

Anyway… I read a book: 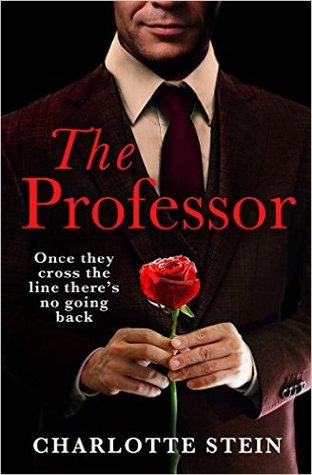 Esther wrote down her fantasies about her tutor, but she never intended for him to read them.
Once they cross the line there’s no going back.
Esther has always been an average student. She coasts through life on a sea of Bs, until a fatal mistake jolts her out of mediocrity and into something else entirely. She accidentally leaves a story in an essay for her teacher — one that no teacher should ever see. And especially not Professor Harding.
His lectures are legendary, and he is formidable. But most of all: he is devastatingly handsome, and now he has Esther’s most private and erotic fantasies. The stage is set for humiliation. Until the Professor presents her with a choice. He offers private tuition at his home.
And at first that’s exactly what she does, sure there remains a line between teacher and student that she would never cross it and that someone like Harding never would. He is far too cold and sharp, and so invested in all of his rules that breaking them seems unthinkable.
A single touch would be too much.
A wrong word could ignite an inferno.
So what happens when both of them want to burn?

I love how books figure in Stein’s writing, how often a love of books is what draws the characters together, as though their physical attraction is largely based on their discovery (their sense, sometimes like radar) of a shared love of books. Stein’s characters love books, tend to feel detached from others, and often take refuge in each other as fellow sojourners from alien planets (perhaps planets populated by readers, that bizarre species). The Professor takes this theme of Stein’s work (present in several of my favorites, including — most recently — Taken and Sweet Agony) and gives it pride of place. Amid book-strewn habitats and a wealth of literary references, these two readers (and writers) negotiate emotional and physical intimacy.

So maybe The Professor isn’t going to end up being one of my favorites of Stein’s work (there’s not quite enough connection to the hero and his conflicts (perhaps because he keeps fleeing the scene), and it’s also not quite as neurotically funny as my favorites tend to be), but… and maybe this doesn’t make any sense, but if the entire body of Stein’s work is a symphony in three or four parts (with her various themes being the three or four movements), then this book is the bass line to one of those movements: essential to any attempt to analyze what’s going on. I certainly feel as though, having read it, I have a better understanding of all the books that came before.

As usual, I’ve been dithering on this post. (I dithered so much that I read Taken again — for the fourth time — because I was trying to figure out what it was about it that I liked so much. I mean, these two books have an awful lot in common: older, somewhat restrained, massive (possibly secret werewolf) hero matched with younger, utterly neurotic, sexually unrestrained heroine. Both books have a slight Beauty and the Beast vibe (you get a hint of it in the cover of The Professor) with the heroine somehow compelled into their company at the beginning, the attraction developing out of a shared love of books, and all the hairy (literal and figurative) issues and fears. Here’s the thing: Taken is also damn charming and funny as hell. I can’t say that it would work for every reader — some folk might not share my love of neurotica, and Taken has a double dose. I mean, really:

“Now I know you’re screwing with me. Either that or trying to flatter me to get out of this — which by the way is even worse than begging for your life. You should not have to say nice things to get out of this. It is way worse if you have to say nice things to get out of this. I will probably get beat up in prison, if I’m not somehow mysteriously killed in the squad car on the way to the station first.”
“Well, before you are, could you maybe just speak a little of it for me?”
“Speak a little of what exactly? What are we talking about here?”
“We were talking about the German that you might possibly speak”
“I thought we were talking about me holding you against your will then being arrested and murdered in a police car, after which there will be a Lifetime movie based on my life called Ugly Hairy Guy Held Me Hostage: The Whatever Your Name Is Story,” he says.

So, yeah. There’s neurotic narration and a lot of neurotic dialogue, but it worked for me. Through the rambling, ever-so-slightly crazy dialogue, you really get to know Johann, and you’re rooting for him and Rosie both, even when they’re being ridiculous.

By contrast, The Professor is a bit more serious in its tone. To an extent, that’s a good thing. I mean, Stein is dealing with some hinky territory here with the professor/student dynamic. But the book is not quite as much fun, and… I missed the fun. Also, Harding is much more remote (sometimes actually remote, like when he just picks up and leaves several times over) and thus (for me) harder to root for as a hero.

But to get back to that bass line, I would probably not have noticed that Johann and Rosie’s courtship in Taken is so deeply dependent upon books were it not for The Professor. (And in Sweet Agony when Cyrian gives Molly full access to the library and reads to her — basically one of the most romantic gestures there ever could be — isn’t it the first indication that they’re kindred souls, despite her background and his otherworldliness?) So maybe The Professor isn’t quite better than the sum of its parts (to me), but those parts — the critiques Harding offers on Esther’s writing; the gut-punch of Harding’s writing; the epistolary scenes; the literary references; and Esther’s strength at the end — are better than most other wholes.

In case you’re curious (not sure why would be, but whatever), I purchased copies of all three books, but I also received an e-ARC of Sweet Agony for review consideration.

4 thoughts on “Books and love: The Professor by Charlotte Stein”