Earlier in the week, author K. D. Grace stopped by to share some insights about the relevance of erotica, and today I’m happy to share my review of The Initiation of Ms. Holly, her latest erotica release.  I was initially reticent to give the book a try, because “initiation” calls to mind ingenue characters who are coaxed from a virginal (or effectively virginal) state of innocence to a sexual awakening and flowering.  But a four star RT review of this book gave me the hope and courage I wanted to give it a try. I’m glad I did. 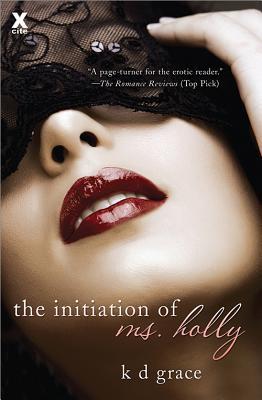 Sex with a mysterious stranger aboard a train leads Rita Holly to an initiation into the exclusive and secretive Mount Club. Sophisticated and deviant rituals await Rita, as do the endless intrigues and power struggles deep within the heart of the organization. Rita learns that membership in the Mount Club is not for the sexually repressed. During her initiation, sex with her new lover from the train, Edward, is forbidden, but Alex the dance instructor is happy to take his place, and Leo the zoo keeper is happy to encourage Rita’s animal instincts. With more and more titillating punishments in store and the club’s sexy head, Vivienne, intent on her failing, will Rita succeed in her lengthy and lurid initiation?

May I just say — again — how much I hate blurbs?  Why would anyone ever want to read a book that self-identifies as “lengthy and lurid”?  Lucky for me, I tend to ignore blurbs, else I would never have read this book.

I’ll start with the obvious: there is a lot of sex in this book.  Yes — DUH, it’s erotica — but even knowing the genre, I was a little surprised at the sheer quantity of sexual encounters.  What was more surprising, though, was how inventive all those encounters managed to be, and that helped avoid the “Oh, my God, they’re getting naked again…” fatigue.

Before I get into the few things that bugged and confused me about this book, I want to talk about the two things I liked best.

There were a number of things about the book that I enjoyed but did not consider as standout as the above two things.  I didn’t approach this book with the expectation that it would have a great story, so I was pleasantly surprised to encounter some elements of mystery.  I found myself wondering why Rita was running from her past, what was up with Edward’s situation, and whether Rita and Edward would ever be able to make a go of it.  (I also wondered why such a big deal was made about Rita not seeing Edward’s face until her initiation was complete and about Rita and Edward not being able to enjoy a tab A, slot B-type encounter during the course of Rita’s initiation.  Frankly, both things seemed a bit overblown to me.)

And now, on to the things that baffled me.

*FTC Disclosure – I received an e-galley from Sourcebooks via NetGalley in exchange for an honest review.*