I was planning to have this post up first thing this morning, but an evil migraine intervened. And then once I could see again, I got kind of caught up in a book that I just had to finish, no matter how much it hurt to read. Anyway. My buddy Kim (from Reflections of a Book Addict) got me to read Jeaniene Frost’s Night Prince series (VLAD. ‘Nuff said.), and I surprised the holy hell out of myself by liking it. A lot. So when I was given a chance to read the first book in Frost’s new series, I jumped on it with hand-clapping glee. I guess this post is part of a blog tour (maybe?), so there’s a tour-wide giveaway of some sort. I wasn’t really paying attention to the details… I’m just here to talk about the book.

In a world of shadows, anything is possible. Except escaping your fate.

Ever since she was a child, Ivy has been gripped by visions of strange realms just beyond her own. But when her sister goes missing, Ivy discovers the truth is far worse—her hallucinations are real, and her sister is trapped in a parallel realm. And the one person who believes her is the dangerously attractive guy who’s bound by an ancient legacy to betray her.

Adrian might have turned his back on those who raised him, but that doesn’t mean he can change his fate…no matter how strong a pull he feels toward Ivy. Together they search for the powerful relic that can save her sister, but Adrian knows what Ivy doesn’t: that every step brings Ivy closer to the truth about her own destiny, and a war that could doom the world. Sooner or later, it will be Ivy on one side and Adrian on the other. And nothing but ashes in between…

I don’t foray much into paranormal/urban fantasy stuff, so you’ll have to take my thoughts with a giant bucket of salt. The thing is, I tend to set a fairly low bar for PNR/UF stuff, not because I think the genre unworthy but because I read it so infrequently that I haven’t yet learned how to set adequately high expectations of it. So this is what I expect from the PNR/UF books that I end up reading: 1. that they have words; 2. that they have fast-moving plots to distract me from all the elements that require me to suspend disbelief. The Beautiful Ashes had both those things, a dash of humor, a swoony, somewhat misunderstood quasi-antihero, and a morally ambiguous underlying theme. In other words, I liked it. A lot.

In many ways, The Beautiful Ashes reminds me of the New Adult lovechild of C.S. Lewis’s The Great Divorce and Neil Gaiman’s American Gods. The demon realms that our intrepid protagonists explore bear some resemblance to the grey town of Lewis’s allegory (though Frost’s version is quite a bit more horrifying); these realms are hackneyed imitations of human life, attempting the grandeur of some of humanity’s more inspired architecture but missing all the light, warmth, and inspiration. I’m a sucker for architecture as character or world development (one of the reasons I love Jane Austen), and I enjoyed that touch. As in American Gods, the characters in this story travel around the continental U.S. (and Mexico) searching for thin spaces (in this case thin spaces of the demonic variety), and, as in AG, the fictional vortexes and portals to demon worlds exist in our world and are completely believable as vortexes and portals. These places include the Oregon desert (I live one state south of Oregon, and I had no idea that state had any areas that aren’t green and perpetually rainy), a B&B somewhere in New England, a section of boardwalk somewhere on the east coast, etc. I hold out hope that in future books in the series the characters will visit the world’s largest thermometer, the Winchester house, and that giant ball of twine.

I don’t mean to imply that The Beautiful Ashes is a knock-off of American Gods. It’s not, mainly because it has a much more positive outlook and because its protagonist is a young woman whose goodness you never really question (rather than a gritty, down-on-his-luck, cuckolded, convict widower who also happens to be the son of Odin). If AG is a trickster mythology celebrating goodness alongside moral relativity and refusing to take a stance on which is preferable, The Beautiful Ashes is a good vs. evil mythology that dabbles in relativity but eventually concludes that things happen for a reason, that there is a divine scheme, that this scheme might suck occasionally, but that it is still important for “good” to keep its eye on the end game.

Much of the conflict in the book derives from the growing bond between Ivy, a genetically predestined savior-type, and Adrian, a genetically predestined betrayer-type. They feel drawn to each other; they learn to admire the other; but they know (Adrian more than Ivy) that there can be no true trust between them. Ivy and Adrian are united by their hatred of demons and their distrust of angels, but that unity is tenuous. I had a few issues with their relationship. For starters, Ivy is about 20 years old, and Adrian is well over 100. In nearly every conceivable way, Ivy is disadvantaged: she’s younger, both in actual years and in exposure to the whole angels vs. demons thing; she has almost no experience with relationships; she has almost no experience of physical relationships; she is naive; and — of course — Adrian, his demon-fighting cohorts, and the angelic host keep her at a disadvantage by feeding her the truth bit by bit, essentially manipulating her with incomplete information. That’s… annoying. (I also wondered if the conflict between Ivy and Adrian, their conflicting destinies, would be as compelling if it were not mentioned so often… and I thought their special bond looked an awful lot like celestial instalust from here.)

Oh, and I just have to tack this bit on here… I wasn’t real keen on the ending. Don’t get me wrong: I was all about Ivy breaking off on her own, sullying her goodness a little bit with some badassery, and journeying into some moral gray area, but… once a character embarks on that path, she doesn’t get to stand on a soapbox of self-righteousness. She hops off that soapbox pretty quick, but I was annoyed that she ever hopped on it.

Bottom line: I liked The Beautiful Ashes and I want more of it, but the romance in this first installment was the weakest element (and I love me some romance…). I hold out hope that the story’s continuation includes more character development, less insane chemistry, and a more even playing field for the protagonists. (I also hope that bit about Adrian being more than 100 years older than Ivy doesn’t come up again. It’s seriously creepy.)

The Beautiful Ashes was released on August 26, 2014 as a paperback and e-book by Harlequin. For more information about the book, click on the cover image above to visit its page on Goodreads. You can find out more about Jeaniene Frost on her website, Twitter, or Facebook.

*FTC Disclosure – I received an ARC from Rock Star PR and Harlequin for review consideration.*

So, I’m a little behind the times… Last week, my bestest book buddy Kim from Reflections of a Book Addict and I teamed up to review the first two books in the Night Prince series by Jeaniene Frost.  I forgot to tag that post here on my blog, and I’m finally getting to it today.  Paranormal romance is not really my thing, but Kim urged me to pick up Once Burned a few months ago when it was on a 50% off sale.  I checked out some reviews, downloaded a sample, fell in love with the voice and bought the book.  You guys… Once Burned and Twice Tempted live here: 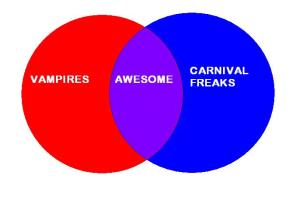 These books are, quite simply, fantastic, and I cannot wait for the third book to be released (I don’t think it’s been written, yet, so it might be a while).  Maybe it’s just that I was reading outside my normal genres, but it’s been a while since I had as much fun reading a book as I did reading these two.  Follow this link over to Kim’s blog to check out our somewhat gushy 2×2 review.