So one day my buddy Kim sent me a text asking me if I’d be interested in reading Indecent…Exposure by Jane O’Reilly, which some readers said reminded them of Charlotte Stein’s writing style. I love me some Stein, so I was all over it. Read on, and Kim and I will tell you all about our thoughts. 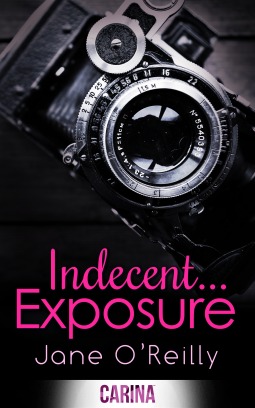 Setting up the money shot…

Quiet, sensible Ellie Smithson is a highly respectable photographer by day – but there are only so many wedding photo-shoots you can take without your mind wandering to what happens when the blissfully happy bride is swept off her feet and straight to the honeymoon suite’s sumptuous four-poster bed…

So after dark, Ellie takes pictures of a more…intimate nature – a dirty little secret she’s kept from her accountant Tom. Until now. It seems Tom is the subject of her next racy shoot!

It isn’t just the blurring of work and personal boundaries that’s the problem; secretly Ellie has always had fantasies of a most unprofessional nature about the almost illegally gorgeous Tom. With such temptation on display, how will she ever stay behind the camera?!

The first book in the Indecent… trilogy.

Kim: Kelly had always told me how much I would love reading Charlotte Stein. I love me some dirty, filthy reads from time to time and Stein fills that box. When I heard that Jane O’Reilly could also fill that box I was indeed intrigued.

Ellie, our heroine, is what got me hooked into the story. I loved her double life so much! On one hand we have a photographer who does fantastic portraits, weddings, babies….you know the typical things a professional photographer photographs. (Say that ten times fast!)

Kelly: I enjoyed Ellie’s double life, too. It’s kind of a parallel to the double life any erotica reader has, right? We’re probably not reading this stuff all the time. Our lives are full of standard fare: work, family, friends, weddings, funerals, etc. Sometimes we read nonfiction, mainstream fiction, romance, sci-fi.  And some of us have e-readers or bookshelves full of dirty, filthy stories that we probably don’t talk about at our book club meetings. (Unless we belong to the best kind of book club.) Anyway, I loved Ellie, because she’s totally neurotic and relatable.

Kim: And how about Tom? And his wonderful, deliciously dirty mouth? He seems all prim and proper from Ellie’s descriptions of him, but when he’s allowed to speak for himself, boy can he turn up the heat. The chemistry between the two of them is palpable at times, and I seriously wanted to cut it with a knife. But he isn’t just a dirty mouth. We learn that he needs to sometimes do outrageous things and get tattoos.

Kelly: Sometimes accountants have to, you know? It can be a boring job… unless you’re SUPER into spreadsheets and numbers…

Kelly: Tom and Ellie serve as interesting foils for the other. Both are somewhat buttoned up, hidden, and repressed in their professional lives, and both fight against that repression (albeit in very different ways). Tom is much more accepting of himself and his needs; Ellie feels shame over hers. In a way, they seem to be a fairly decent example of how modern culture accepts (even assumes) the desires of men but shames those of women.

Kelly:  So Tom and Ellie are wonderful, and their scenes are interesting (and filthy), but… let’s talk about the setup for a bit. Because the plot and conflict in this story are a little strange. So Ellie’s best friend Amber has discovered that her boyfriend has not only been cheating on her, he’s gone and proposed to the other woman. So she’s like, I’ll show him! So she tells the guy in line behind her at the bank — that’s Tom, Ellie’s accountant — that Ellie takes erotic photos, and would he like a blow job (that Ellie will photograph). And he says yes, of course. (Of course.) Amber asks Ellie for this super special photo of the event, and Ellie doesn’t quite get the shot, because she’s distracted by Tom, how much she likes him, and how jealous she feels in the moment. That super special photo (more accurately the lack of it) ends up being one of the major pieces of conflict driving the story, which makes no sense to me.

Kim: Much is made about the friendship between Ellie and Amber, like how much Ellie owes Amber for keeping her “together.” I’m not really sure what she went through that Amber kept her from breaking apart, but I truly never understand their friendship.

Ellie tells nobody about her side business. Nobody but Amber. And here we have Amber taking advantage of it, telling Ellie’s accountant about it, just so she can get back at a cheating boyfriend. Which, not for nothing honey, but if he chose another woman over you chances are a picture of you blowing some other dude isn’t going to piss him off.

Kelly: Yeah, no kidding. But Amber’s obsessed with showing this money shot image to her Cheaty Mccheater boyfriend, convinced that it’ll make her feel better (how?). And Ellie — the narrator of this piece — pretty much just goes along with it (and you get the idea that that’s how their friendship goes: Amber behaves in incredibly selfish and destructive ways and Ellie just goes with it because she has few friends, anyway, and she feels a debt of gratitude to Amber, because Amber helped Ellie get through her difficult school years. Also, I suspect that Ellie is a bit of an unreliable narrator at times.). The more Amber rages about the cheater, the more Ellie capitulates. And even when Ellie and Tom act on their mutual attraction, Ellie still isn’t able to separate herself from Amber’s will. It’s very strange how Ellie sees herself as Amber’s necessary pawn. Fortunately for us readers, Tom doesn’t, and he spares us what would otherwise be a very awkward scene.

Kim: What really pissed me off was when Amber yelled at Ellie for not being honest with her about her feelings for Tom. As if she could with Amber hollering all the time about “why didn’t you get the money shot?!!?!”

AND THEN Amber’s ending (in this story at least). KGJKLGJ:KSGJLKDJKDFK

I’m so angry I can’t produce words. All that drama was for nothing!!! Amber’s selfishness knows no bounds. She truly cares for herself and her pleasure only.

Kelly: yeah.. It might have been better if the actual conflict of the story had stayed focused on Ellie and Tom and their respective drama. Of course, how would they ever have discovered the other’s inner pervert if they’d remained ever accountant and client? (I don’t know the answer, but I’m sure a lot of folks could come up with plenty of scenarios that didn’t involve revenge BJs. Just saying.) Anyway, so much page time was given to Amber and her stupid drama that the actual conflict of the story — Ellie and her issues and Tom and his and their budding romance (and boinking) — got shifted to the side a bit, and it sort of falls flat, in the end. (I thought.) I also thought they stumbled toward love — in the forever way — a little too quick.

Kim: Agreed! It was a bit magic penis if you will.

Kim’s final thoughts: Even with Amber and the magic penis bit, I still genuinely enjoyed the novella. I enjoyed seeing two people cast off the shame society made them feel and come into their own. By the end of the book Ellie and Tom know who they are and, as such, are able to bask in the newness of their relationship and (too fast) love for each other.

Kelly’s final thoughts: I liked it, too.  It’s funny, because I’d already read a bunch of Charlotte Stein’s books, and — at first — the similar style and voice threw me off. But I just re-read this novella today, and it seemed a lot more distinct and original (and un-Stein, if that makes sense) than when I first read it several months ago. It’s possible that on my first read, I paid attention to the things that seemed familiar. On the surface it seems just like it’s using a Stein trope, as though neurotic characters + dirty sex = “in the style of Charlotte Stein”.  But on a second read, that similarity seemed incidental. Or maybe I just want all erotica to be written in the style of Charlotte Stein. Whatever. I’ll be keeping an eye out in future for Jane O’Reilly.