When you read as much as I do, it’s probably inevitable that you find your auto-buys. (Unless you’re one of those strange creatures that actually deliberates every purchase.) Most of the book-happy people I know have a running (and evolving) list of auto-buy authors, and some of us also have auto-buy tropes or story types. (The really smart folk out there use their local library. Just saying. Note: I’m not one of those smart people…)

I have an auto-buy authors list and an auto-buy trope list, and I tend to get suckered into reading series books. I mean, you probably knew that, right? It’s not as though I’ve made much of a secret of my lamentable decision-making skills. The thing is, pain fades, and memory imperfectly recalls. (But I just have to interject for a second here… I was told that I’d forget about the pain of childbirth once I looked into my baby’s eyes. I didn’t. 4 and 5 years on, I still remember with stunning clarity the pains, twinges, humiliations, degradations, irritations and fear of childbirth. Maybe some women forget but not all.) Once I am no longer reading a book that I did not enjoy, I can tend to forget what I didn’t like about it, especially if it’s a book in a series. I can lose myself in the hope that the next book will be better. I rationalize: I’ve already taken the trouble of getting to know the secondary characters; wouldn’t it be nice to know where/how they end up? Don’t I want to see the overarching plot resolved? Enter The Disgraced Lords series by Bronwen Evans. 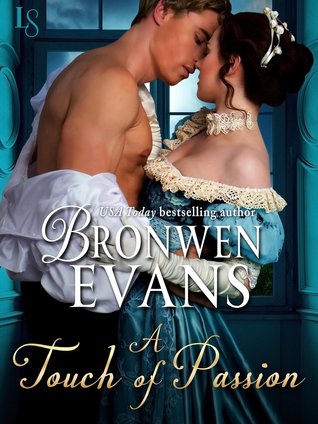 Independent and high-spirited, Lady Portia Flagstaff has never been afraid to take a risk, especially if it involves excitement and danger. But this time, being kidnapped and sold into an Arab harem is the outcome of one risk too many. Now, in order to regain her freedom, she has to rely on the deliciously packaged Grayson Devlin, Viscount Blackwood, a man who despises her reckless ways—and stirs in her a thirst for passion.
After losing his mother and two siblings in a carriage accident years ago, Grayson Devlin promised Portia’s dying brother that he’d always watch over his wayward sister. But having to travel to Egypt to rescue the foolhardy girl has made his blood boil. Grayson already has his hands full trying to clear his best friend and fellow Libertine Scholar of a crime he didn’t commit. Worse still, his dashing rescue has unleashed an unforeseen and undesired consequence: marriage. Now it’s more than Portia he has to protect . . . it’s his battered heart.

A Touch of Passion is book 3 in the series, and I ended up enjoying it (the first half was rough), although not unequivocally. But I probably should not ever have read it, because I didn’t much care for the first two books in the series. (I was particularly unimpressed by the second book.)

And now, of course, enough weeks have passed that I’m starting to forget the things I didn’t like about the book. So I thought I’d write it all down now, so I might stand a better chance at making a more informed decision when book 4 comes out. (Otherwise, I’ll almost certainly read it without any consideration at all. Don’t get me wrong: I’ll still probably read it, but wouldn’t it be better if I did so after putting some actual thought into it? Maybe?)

A Touch of Passion reminded me (favorably, but still) of the second Black Cobra book by Stephanie Laurens. (It also reminded me a bit of The Pleasure of Your Kiss by Teresa Medeiros. It’s closer in plot, perhaps, to this book, but the chapters of boat travel brought back memories of the Laurens book). The hero is an asshole for most of the book. It’s episodic and jumpy, and I continue to have a difficult time with the notion of the heroine being sold to a convenient Arabian harem yet still maintaining her virginity for the hero through a way too well-timed rescue. (Conversely, I’m disturbed by the idea that I might prefer for the heroine to have been sexually exploited for the sake of reality. It’s more accurate to say that I feel manipulated by the story line no matter how it goes. The threat of violence against women is often just as bad as actual violence against women, especially when it’s unclear exactly what narrative is served by that threat.) Finally, the book doesn’t really move forward the overall plot of the series all that much.

These are heavy misfortunes for a book to bear, and the book’s nearly excellent second half does not quite tip the scales back into a positive balance. To be fair, though, I should mention that the denouement was pretty much everything I’ve ever wanted in an ending. I’m half convinced that Evans should undertake a public service project and take all the books that have shitty endings (Tess of the d’Urbervilles, for example, or Women in Love) and fit this ending in somehow. The world would be a better place.

So what do you think, friends? I have some good reasons to hope that book 4 will be spectacular (in either a good or a bad way; who knows). Where’s the line? When does hope cease to be rational? Have you ever continued a series even when all hope of its getting better was lost?

*Disclosure – I received an e-galley for review consideration from Loveswept via NetGalley.*