So do you remember back in March when I said I was on a bit of a Charlotte Stein kick? All told, I read ten of her books over the last few months, and today I’m going to talk about two of them.

Stein writes erotica with a distinctive voice, one I like (obviously). The thing is, erotica doesn’t come naturally to me. My neurosis and overactive sense of humor work against me, and my hyper-awareness of awkward details tends to pull me out of whatever mood an author is trying to create. Further, I’m always 100% aware that I’m reading erotica, that — at some point in the not too distant future — the characters are going to get nekkid and start doing things to one another. Whenever it becomes clear that the nekkid moment is approaching, my mind starts playing a porn soundtrack loop, and nervous giggling is not far off. There is an incompatibility between my brain and most erotica. 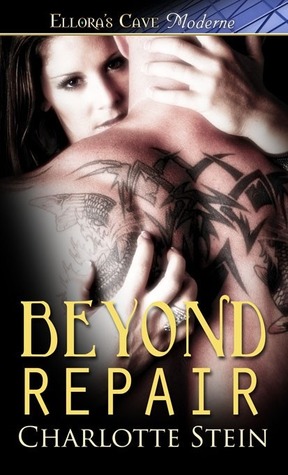 When Alice Evans finds a bona fide movie star on the floor of her living room, she has no idea what to do. Ordinary men are frightening enough, never mind someone as famous and frankly gorgeous as Holden Stark.

However, once she realizes that Holden is suffering behind that famous facade, she knows she has to help. He needs someone like her to give him a taste of sweetness and desire and love. He needs normality. The only problem is—Alice is hiding a secret that is far from normal. In fact, her name isn’t even Alice at all.

And once Holden finds out, the intense connection they are just beginning to build may well be torn apart.

I read Beyond Repair in one sitting, pretty much, and I started reading it all over again the minute I finished it. After the third read, I had to force myself to move on to another book, because all I wanted to do was keep on reading this one until the end of time. Months later, I’m not sure that I can explain my reaction to the book. (Beyond Repair and I have insane chemistry together, maybe?) I mean, it has all my favorite things: neurotic heroine; story told from heroine’s POV; third-person past narrative (a narrative style that is — to me — as comfortable as cotton granny panties. Maybe it’s just me, but a first-person present narrative is about as comfortable as a cheap lace thong; you can’t ever forget it’s there, slightly abrasive, pressing up against your intimate areas. Just saying…); a mysterious back story; epic movie references; a smitten, supplicant hero; a spectacular ending. (Beyond Repair also managed to make butt-licking vaguely sexy — I didn’t think that was possible — and believable as something these characters would actually do and enjoy.) All told, the book is, to me, an exemplar of pitch-perfect erotica. And it made me cry (in a good way). 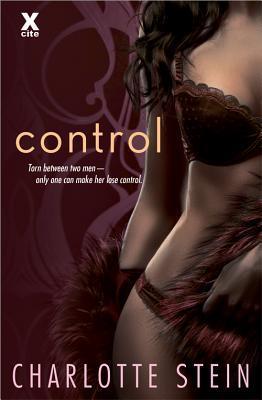 When Madison Morris decides to hire an assistant to help run her naughty bookshop, she gets a lot more than she bargained for. Aggressive Andy doesn’t quite make the grade, but continues to push her buttons in other areas, while uptight and utterly repressed Gabriel can’t quite take Madison’s training techniques. One makes her grasp control, while the other makes her lose it. But the lines are blurring and she’s no longer sure who’s leading and who’s following. In the midst of kinky threesomes and power plays, can Madison work out what she really wants?

Control is the second Stein book I read, after I begged folk on Twitter (thank you @mojitana, @LietoFine7 and @ruthieknox!!!) for recommendations. (I read Doubled first, which is awesome, hilarious, dirty as hell, surprising, and slightly disturbing, all rolled up in a glorious coming-of-age (ish) menage story involving a set of twins and their lady friend. Yeah. You read that right.) Control was completely unexpected — even though the blurb warned me — and wonderfully wrong. I mean, the book opens with a job interview/lurid encounter during which the heroine/narrator marvels — with impressive emotional distance — at its even happening. Later, Madison finds herself stumbling into a relationship with another guy, one whose issues are legion but who better suits her undefined, unexplored and mostly unacknowledged (but still accepted) wants and needs.  Actually, that’s an important point: Madison, like many of Stein’s heroines, “finds herself” doing all manner of things, and I mean that both literally and figuratively.

Madison is a slightly unreliable narrator whose emotional disconnect is explained (her father was “controlling”) but perhaps never quite understood (by me, I mean). But, even though I didn’t fully understand why Madison was so reticent to acknowledge the emotional nature of her relationship(s), I still thoroughly enjoyed the experience of reading Control and have recommended it to a few people. I liked the way it discussed the power dynamics of a nontraditional workplace relationship (lady boss, man employee) and the way Gabe’s relationship with Madison freed him from some of his repression and fear. I wish it had been equally clear what Madison gained from the relationship (and all the nekkid shenanigans) — but perhaps that’s just part of a first-person narrative — and I wish that Andy had not been left swinging in the breeze. The things I loved about the book, however, more than made up for these slight reservations.

For more information on Beyond Repair and Control, click on the cover images above to visit the books’ pages on Goodreads. If you’re interested in Charlotte Stein (and you should be), check out her website and Twitter.

*FTC Disclosure – I received an e-galley of Beyond Repair from the author in exchange for review consideration. I purchased my copy of Control. *