HI. It’s been a while, I know. I’ve been reading, but I have not had very much time lately for writing. I am hoping that over the next few weeks I can catch up a bit on my backlog of reviews. We’ll see how that goes.

I read A Promise of More in early April, and…well, I should let this tweet speak for me.

Every now and then when I'm reading a book, I think, what would @heidenkind do? And I realize she'd stop reading. Then I keep reading. WHY?! 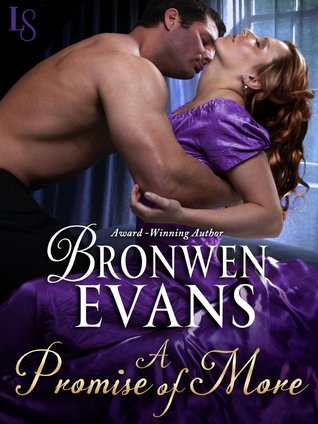 When Beatrice Hennessey sets out to confront Lord Coldhurst, the notorious rogue who killed her brother in a duel, her intent is to save her family from destitution. She’s determined to blackmail the man into a loveless marriage. She’ll make the wealthy Lord Coldhurst pay for the rest of his life. But while greeting his ship, Beatrice takes a tumble into the Thames—only to be fished out by a pair of strong masculine arms that tempt her to stay locked in their heated embrace forever. That is, until she realizes those arms belong to Sebastian Hawkestone, Lord Coldhurst himself.

The little drowned mermaid has an interesting proposition indeed; one that Sebastian is surprised to find quite agreeable. Although he’s had women more beautiful, she is pleasing to the eye, and besides, it’s time he fathered an heir. Beatrice promises to be the ideal wife; a woman who hates him with an all-consuming passion is far too sensible to expect romance. However, it isn’t long before Sebastian’s plan for a marriage of convenience unravels, and he’s caught up in the exhilarating undertow of seduction.

You may remember that I read (and was ambivalent about) the first book in this series, A Kiss of Lies. I had fairly high expectations for A Promise of More based on the many things I enjoyed about the first book. I expected well-wrought characters, good writing, an interesting, fast-moving plot, and a compelling romance. I hoped that it wouldn’t contain any distressing social missteps. Maybe it’s my fault for expecting so much, but I was utterly confounded by A Promise of More. The characters made no sense, the writing was frequently weak, the plot was kinda crazy, and the romance was… well… not compelling.

In fact, I felt like I was reading my 32nd Stephanie Laurens book, if Laurens had fired all her editors and lost her mind a little bit.

Sebastian reminded me of the hero of All About Passion. Both heroes are convinced that love and passion are the source of all evil in a relationship and seek to marry women for whom they feel no passion; both heroes are thwarted in their goal and end up — through pure male stupidity — married to women for whom their loins BURN (but not in an STI way, thank goodness); both heroes spend an uncomfortable amount of time trying to deny the passion and love they feel, trying to convince the heroines that they will never, ever love them. Also, both heroes are total douche ponies.

Beatrice reminded me a little bit of all of Laurens’ heroines, because her entire character arc was focused — once she realized that Sebastian wasn’t a murderer — on getting Sebastian to say the magic words, “I love you.” I’m not exaggerating.

A Promise of More also has an intrigue plot (just like every Laurens book). The thing is, when the conflict between the characters is as lame as one character saying, “I will never love you, because I am opposed to love!” and the other character saying, “I am going to get you to admit that you love me, because… reasons!” you really need a solid intrigue plot to move things along and keep people reading. This book had a mystery — who killed Doogie?! — and an obvious and rapetastic villain who would have been improved by a sinister mustache. There is also an irritating she-villain. (Further, the intrigue plot is a bit problematic. It relies heavily on violence and the threat of violence against the heroine, and there is an actual ripped bodice.)

I might not have noticed the parallels between this book and Laurens’ canon — strangely enough — if the first sex scene in A Promise of More had not included a reference to flying and stars bursting and firestorms of desire. Laurens is famous for writing OTT sex scenes that are incredibly descriptive and employ strange, celestial references. Evans seems to be following in those footsteps. After that first star burst, the other similarities just stuck out to me.

I read an ARC, so it’s possible that some of the weird stuff in the book got cleaned up in a last-minute bit of editing. (I hope so.) There are plenty of conversations wherein the characters repeat themselves, and there was one hilarious moment where the heroine — who had been hanging onto the bed during some naked gymnastics — was suddenly clinging to the “bed head.” These things are minor and easily overlooked when the rest of the book is interesting; but when the rest of the book reminds you of a Stephanie Laurens book, it’s hard not to notice and be irritated by editing issues.

So where does this leave me? Except for one thing, I enjoyed the first book in the series, and I am inclined to hope that this book’s issues are a fluke. I’m not sure what it means about me that I could spend an entire post detailing all the things I disliked about a book and then conclude that I’ll happily pony up to read the next one… but it’s true.

A Promise of More was released on April 15, 2014 as an e-book by Loveswept. If you’re curious about the book, click on the cover image above to visit its page on Goodreads. To learn more about Bronwen Evans, check out her website.

*FTC Disclosure – I received an e-galley for review consideration from the publisher via NetGalley.*

7 thoughts on “Review – A Promise of More by Bronwen Evans”