So, I was just putzing around on Twitter last Thursday when I saw a tweet from author Jackie Barbosa that shocked me with its reality.  Her son was killed in a traffic collision on his way to school that morning, and she was reeling. Over the next few hours, I saw tweet after tweet from authors, fans, friends, and bloggers offering support, love, and prayers. In the days that followed, a memorial fund was established to honor her son and eventually fund a scholarship in his name, and a bunch of authors, readers, and bloggers decided to help out in a creative way.  As author Courtney Milan put it on her blog, “Online, there’s no way to make someone a casserole or take her flowers, but there is something we can do to help ease her burdens and to send her the message that she is supported in this time: that is, for a short space of time, to take over the burden of talking about her books.”

So I’ve been reading books by Jackie Barbosa lately, and today I want to talk about them. 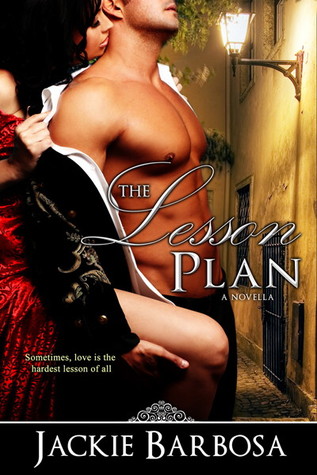 The Lesson Plan (Lords of Lancashire #1)

Sometimes, love is the hardest lesson of all… Despite her imminent debut, Miss Winifred Langston has no interest in trying on expensive ball gowns, learning intricate dance steps, or perfecting the one piece she can play on the pianoforte. Freddie would rather don a pair of breeches and go target shooting, fishing, or horseback riding—astride—than be anywhere near a ballroom or high tea. Rather than waste the last few days of her freedom on such pursuits, she invites her two closest friends to join her in one final caper.

Now, he only has to convince the irrepressible Freddie to trade her breeches and madcap ways for the gowns and domesticity she despises.

I bought this book without reading the blurb because I’d already read and loved the second book in the Lords of Lancashire series. Then I read the blurb, and its final sentence worried me, but I was determined to trust that the woman who wrote Hot Under the Collar (which I loved) could not greatly err.  I was right.

The Lesson Plan has some of my favorite things: a cross dressing heroine; a slightly repressed hero who does things that are wildly out of character (or wildly in tune with his repressed — but true — self); a mad plan that goes awry; a masked man who looks — in my imagination, anyway, and that’s what really counts — like Westley/Dread Pirate Roberts; seemingly unrequited love that dates from adolescence; a heroine who is comfortable with her sexuality. It is steamy, fun, romantic, and a little bit sweet. In short, it was exactly what I wanted.

Hot Under the Collar (Lords of Lancashire #2) 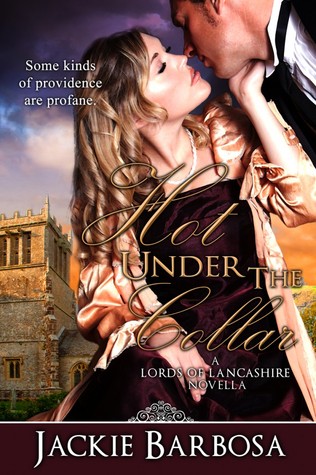 Despite the old saw about third sons being destined for the church, no one ever expected the rakish, irresponsible Walter Langston to take up the collar, least of all himself. After an accident renders him unfit for military service, however, he has few other options. When he’s given the post of vicar at a parish church in a sleepy, coastal village, he’s convinced he’ll molder in obscurity. Instead, his arrival brings a sudden resurgence in church attendance…or at least, the attendance of female parishioners. As word of the eligible young vicar spreads, every well-heeled family for miles with a marriageable daughter fills his pews, aiming to catch his eye. Unfortunately for these hopeful members of his flock, Walter’s eye has already been caught—by the one woman who doesn’t come to church on Sundays.

Artemisia Finch left a lucrative career as a celebrated member of London’s demimondaine to care for her ailing father. Returning home hasn’t been easy, though, as her past isn’t even a well-kept secret in the village. When the new vicar arrives on her doorstep, Artemisia is determined to send him on his merry, pious way. But Walter Langston is nothing like any man of the cloth she’s ever known—he’s funny, irreverent, handsome, and tempting as sin. Falling in love with a vicar would be a very bad idea for a former courtesan. Why does this one have to be so hot under the collar?

I read and reviewed this book in 2012 in a multiple-review post, so I’m just going to copy the text that relates to Hot Under the Collar.

I was the lucky winner of a giveaway hosted by The Dashing Duchesses (always a fount of interesting information).  I love winning things, especially since it doesn’t happen very often, but I especially love winning things that I can really enjoy.  I enjoyed Hot Under the Collar, because it’s a fairly steamy romance novella with a happy-go-lucky vicar as the hero.  No kidding.

One of the things I love about the romance genre is that its authors often take the accepted assumptions about the time (for example that women were downtrodden waifs whose lives were completely controlled by men) and turn them around, writing novels with independent female characters who direct their own lives.  Hot Under the Collar does an excellent job of highlighting one of the cultural double standards of the time (and it’s still a double standard in our time, let me point out) that it was perfectly acceptable for men to have misadventures and then go on to be respectable members of society, but it was absolutely unacceptable for women to do the same, even if those “misadventures” were not really of their own doing.  So Walter is a respectable country vicar even though he spent his youth carousing brothels and gaming hells and being a general ne’er-do-well, but Artemisia is shunned by her community because she was fully compromised (in a family way) when she was sixteen, taken in by false promises of love.  Walter, as a vicar who doesn’t believe he has the right to judge anyone, ends up teaching morals and values to the entire community by behaving morally.

I loved this story and could not put it down.  Walter is glorious, funny, charming, and indomitable, and Artemisia, while generally accepting her circumstances, is confident and strong, exactly the sort of character whose story I want to read. The secondary characters add depth to the story, certainly more depth than I expected from a novella, and allow us to get to know Walter in his professional guise.

I know I’m gushing, but whatever.  The best books (my favorites, anyway) are the ones that make me feel better about humanity, and this one jumped to the top of my list of feel-good favorites. 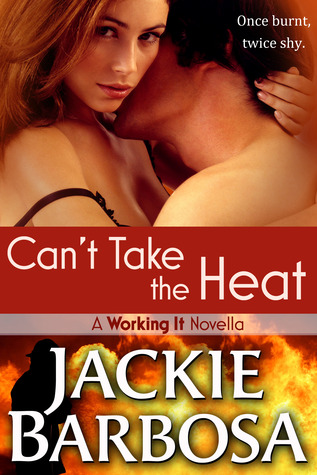 Delaney Monroe could have married her college sweetheart, Wes Barrows, and lived the life of the idle rich thanks to his family’s casino money. Instead, she chose to become a firefighter. Unfortunately, that decision ended her relationship with Wes, who couldn’t bear the thought of her in such a dangerous profession. A little less than three years later, Del is one of the most respected members of her crew and loves her job, but she desperately misses Wes. Then, during a search and rescue operation, she’s knocked unconscious by falling debris.

Wesley Barrows finds himself with a major dilemma when his ex-girlfriend wakes from a serious head injury with no memory of the past few years or the circumstances that led to their breakup. On one hand, it’s the opportunity he’s longed for since he blew it and let her walk out the door. On the other, the fact that she’s got amnesia at all is the fault of the risky occupation she chose despite his objections. When her neurologist recommends that Delaney be allowed to recover her memory without being told what’s happened, Wes has no choice but take her home and act as if they’re still together, which isn’t a hardship when, in his heart, they always were. But as the bond between them becomes closer and more passionate than ever, Wes knows he risks losing her all over again when the truth comes out.

Having read two of Barbosa’s historical novellas, I decided to give one her contemporary stories a try. I love second-chance stories, in the same way that I love seemingly-unrequited-love-dating-from-adolescence stories… it’s the notion that the characters have all this baggage between them of a failed relationship or all their childish longing and have to sort it all out in order to reach happily ever after. (Maybe it won’t surprise you to hear that I married my adolescent love.) I like the inherent conflict in these kinds of stories, and I also like that this story type precludes my least favorite character trope: the character who’s opposed to love because of reasons /tangent. I was predisposed to like this story, but I was a little surprised by how much I liked it.

The blurb doesn’t prepare you for the cool way Barbosa handles the familiar second-chance-due-to-amnesia story line, and I love how sneaky it is. One minute you’re tracking along with all your expectations, and the next you’re like well, that was a surprise. And, if you’re like me, you’re thrilled that a contemporary novella had the power to surprise you, to run contrary to your expectations and still be completely enjoyable. I was also surprised by how steamy the sex scenes are (for reals… #buttsex).

My favorite thing about Can’t Take the Heat is that it features friendship in a big way. While Delaney ends up leaning on Wes after the accident, she runs to her best friend for comfort and conversation, and the scene between the two women is absolutely my favorite in the book. It reminded me so much of my own friendships. It is rare to find a book that authentically portrays friendship, and I think y’all should check this one out just for that and let everything else be a bonus.

For more information about Barbosa’s books, check out her website. If you’re curious about any of the books I highlighted here, simply click on the cover images above to visit their pages on Goodreads.