I read Tawny Weber’s A SEAL’s Salvation last week.  I liked a lot of things about the book, but I found its depiction of female friendship rather problematic.  I’m hoping it’s just me. 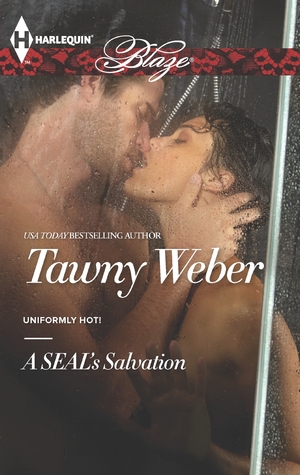 Where navy SEAL “Bad Ass” Brody Lane goes, trouble follows. Being run out of his hometown years ago for misbehaving with Genna Reilly—the sheriff’s daughter—was one thing. Now Brody is about to step into real danger. Not the suggestive letters he’s been exchanging with Genna, but the kind of trouble that can send a soldier home injured and broken inside…

Genna’s entire life has been orchestrated by her family. The right job. The right friends. Enough! Brody’s return offers the promise of lust-filled pleasures. Of flesh teased and tasted. She’s not expecting to find a soldier with distant eyes who has secluded himself from the world. But this good girl knows exactly how to bring a bad boy back to life….

Some of you probably know already why I wanted to read this book.  It’s that injured hero trope, calling out to my soul and promising compelling and emotionally satisfying entertainment.  And the blurb also hinted at one of my favorite heroine tropes: the heroine who gets her shit together and embraces her true self.  It was a foregone conclusion that I’d enjoy the story, considering the elements it’s composed of, and I did.

I loved Genna’s penchant for baking, for example, and her moxie and entrepreneurship.  I loved Brody’s Grandma.  I loved Brody.  And those letters Genna and Brody exchanged before his injury were absolutely my favorite part of the book.

In fact, I liked pretty much every element of the story except one: Genna’s friends.  Maybe I’m just the luckiest damn person on the planet for having truly awesome women as friends (I totally am), and maybe that extreme good luck skews my perception of reality, but I really find it jarring when female friends in romance novels are depicted as crazy bitches or just as bad friends.

At the beginning of A SEAL’s Salvation, Genna’s best friend Macy is living with her while

planning all the last-minute details before her epic, but ultimately rather sad, wedding.  Macy spends a lot of time trying to convince Genna to date this guy whom Genna doesn’t like, doesn’t find attractive, and who kind of creeped her out on their first and only date (he collects troll dolls.).  When Genna points out all the reasons that she doesn’t want to date troll-collecting Stewart, Macy suggests that maybe Genna should go out with Stewart anyway, because it would make Genna’s parents so happy.

Later on, Macy — who thinks Brody is a Very Bad Guy — threatens to tell Genna’s outrageously overprotective parents about their relationship because… ?? Genna is 27 years old.  And this is Genna’s best friend.  In every appearance in the book, Macy is critical of Genna and dismissive of Brody (and not even because she’s genuinely concerned for Genna).  In Genna’s darkest hour towards the end of the book (between conflict and resolution), her last wish is to call her friends.  She’d rather be alone, and that makes perfect sense. Her friends suck.

Now… I’m sorry, but that’s just not friendship, and it makes me feel ragey.  And, again, maybe I’m just the luckiest woman alive to have such super awesome lady friends (and a few dudes, as well) — none of my friends would ever try to push me into dating any dude who didn’t light my fire (it’s moot, but whatever) and none of them would ever EVAR so disrespect my judgment as to tattle on me, a grown woman!, to my parents.  Come the fuck on — but I doubt I’m the only woman with fantastic friends, and it drives me wonky when this real friendship, often the most important thing in a woman’s life, doesn’t show up in the romance novels I read.

So, last week I wrote on Book Bloggers International about romance novels as entertainment, catharsis, and activism, and I paid particular attention to Courtney Milan’s entire body of work (but I highlighted her most recent release, The Countess Conspiracy), Tessa Dare’s latest, Romancing the Duke, and Robin York’s New Adult release, Deeper.  Do you know what else those three books have in common?  Awesome depictions of friendship.

The Countess Conspiracy is the latest in Courtney Milan’s Brothers Sinister series, and it tackles some pretty hefty subjects, most of which are best discovered while reading the book.  (As an aside, one of my favorite things about Milan’s writing is that she respects her characters’ privacy and allows them to reveal themselves to readers over the course of the book.)  This book so beautifully depicts female friendship.  Between Jane, Minnie, and Violet, there develops a true friendship based on mutual appreciation and respect (Jane and Minnie are the heroines of the first two full novels in this series.).  Between Violet and Alice there develops a friendship between equals and colleagues that is a wonder to behold because of its resemblance to friendship among male colleagues, and yet it is uniquely feminine and the more powerful because of that femininity.  I wish we got to see more of it (but I understand that it’s sort of beside the point, as far as the narrative is concerned.)

Kim (from Reflections of a Book Addict) and I wrote another of our dueling reviews (this one with an actual disagreement in it!) about Romancing the Duke, Tessa Dare’s latest, that discusses the important role friendship plays in the book.  I’m not going to bother reiterating our arguments here… so go check it out!  It’s pretty great, I think.

and picked up by a cadre of trolls who use images of her naked body to shame and dehumanize her.  In the wake of all these revenge porn attacks — that occur not just once and done but again and again and again — Caroline and West forge a cautious not-quite-friendship that is the focus of this book told in shifting-perspective, first-person-present narration.  But it is through Caroline’s friendships with her roommate, the members of the rugby team she joins, and, to an extent, with West’s roommate (Sorry — I’m awful with remembering character names, and I don’t have my copy of the book with me) that Caroline discovers her strength and begins to heal.

So, there you go.  If you find yourself interested in any of these books, just click on their cover images to be transported to their page on Goodreads.  A SEAL’s Salvation was released on January 21, 2014 by Harlequin.  For more information about Tawny Weber, check out her website.

*FTC Disclosure – I received an e-galley of A SEAL’s Salvation from Harlequin via NetGalley in exchange for an honest review.  I purchased the other books.*