But sometimes I wonder if it also produces more complacent reading.  If you know what to expect going into a book and if your expectations are usually met, isn’t it easy to start reading to your expectations, finding in your reading only what you expect to find?  And when that method of reading becomes your comfortable habit — it’s so easy — what’s going to make you break free? 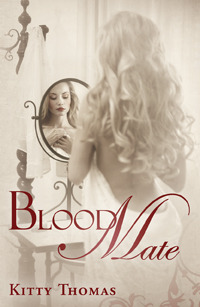 When I started reading Blood Mate, I had no idea what to expect.  Was it paranormal? Yeah, I guess… I mean, it’s about a vampire, so I guess it qualifies.  Was it a romance? No, not really. Was it erotica? Ish? Was it dark erotica?  Sort of, but it’s not actually as dark as you’d expect.  So what is it?  It’s exactly what it says it is: a dark fairy tale.

Nicole has been happily married to big shot attorney, Dominic Rose for ten years, but soon after their anniversary he grows cold—as if she doesn’t exist. Meanwhile, another man has been pursuing her far too intently for comfort.

August Corinth is a six-hundred-year-old vampire, cursed to kill and suffer the pain of his victims each night until he can find the one woman who can resist his thrall, his blood mate. Once he’s found her, there are no lines he won’t cross to claim the promised salvation even if it means taking away everything and everyone she loves.

I found, reading it, that when I took it at literal face value, I didn’t really get what was going on, and I didn’t like it much.  But I took an Olympics-induced break about halfway through and spent a few days thinking about the story, about my expectations, and about whether I was reading it properly.  I kept going back to that subtitle, a dark fairy tale.

When I started reading Blood Mate as a fairy tale, it transformed.  So I went back to the beginning and started it again, approaching it the way I would a myth or epic poem.  August is full of that classic, epic arrogance and selfishness, character traits that seem out of place in a modern story but fit right in an epic tale.

(Epics are full of these douchey dude characters who manipulate and destroy — often specifically destroying the lady characters — and then bitch and moan when everything doesn’t turn out perfectly for them.  Often, it takes the intervention of the gods to rework the human ending and pitch it in favor of the douchey dude.  Hey, Odysseus, I’m looking at you.)

From his first appearance in Blood Mate, August Corinth typifies the epic douchebag.  He is remarkably self-centered, and his response to every hint of adversity is self-pity and a fundamental expectation that his happiness trumps everything.  He is, then, in addition to being an actual vampire with the fangs and the blood sucking, an emotional vampire, toxic in his selfishness, forever taking, demanding everything out of life.  The emotional vampirism goes one further as August uses his bond with Nicole to remove her painful emotions after the various traumas she experiences at his hands.

He’s not a damn romantic hero, and I don’t think he’s cast as one.

On the flip side, there’s Nicole, who’s kind of a cipher, clinging to seemingly insignificant pieces of identity as she lives in the shadow of first one then another man who claims her as mate.  With her husband, Nicole clings to her unnecessary job and preference for sweet coffee drinks.  With August, Nicole clings to her identity as Dominic’s beloved and struggles to maintain her sense of self as all her emotions are leeched away.

If you try to read the story in a straightforward and modern way, expecting the kinds of things you usually expect, you’ll probably be disappointed.  There isn’t really a resolution for August, Nicole, or Dominic.  August doesn’t exactly grow in self-awareness, and Nicole doesn’t achieve any clear peace or positive reward for all her sacrifice and struggle.  And Dominic… I think maybe that guy’s more of a winner than either August or Corinth.

But, if you abandon your expectations — more than that, if you actively question why you even have those expectations in the first place — you’re in for an interesting read and an even more interesting period of reflection after the reading is done.  Who is the hero in this book? Who is the victim? Whose path is righteous? Who wins at the end? And, honestly, why do we approach books expecting a clear winner or loser?

I’ll be honest… I’m not really sure what the ending of Blood Mate is all about.  I’m a reasonably intelligent human being, but the ending — kind of like the last scene of The Sopranos — leaves a big question mark for readers and refuses to make it easy on us.  So what happened and what does it all mean? That’s for you to decide. And isn’t it fucking awesome that you have that kind of power as a reader?

Blood Mate was released by the author on January 30, 2014.  For more information about the book, please click on the cover image above to visit the book’s page on Goodreads.  If you’re curious about Kitty Thomas, check out her website.

*FTC Disclosure – I received an e-galley from the author in exchange for an honest review.*