I know you were totally thinking to yourself, “Books are great, Kelly, but what I really want is another video of an Advent carol.”  I knew it!

So I have three more holiday novellas to spotlight this week.  I loved one of them, thought one was enjoyable if a tad unremarkable, and did not at all like the third.

First up is the best of the bunch, Nina Rowan’s ‘Twas the Night Before Mischief. 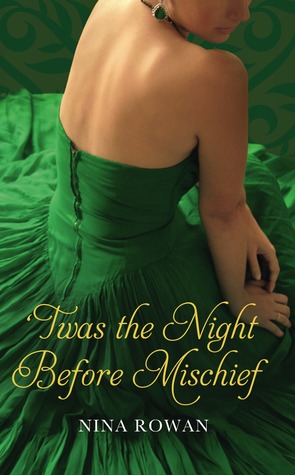 Cover image, ‘Twas the Night Before Mischief by Nina Rowan

‘Twas the night before mischief and all through the house, a lady was plotting—it was time to break out!

When Penelope Darlington is persuaded to elope with a most unsuitable suitor, she wastes no time. With visions of passion and adventure dancing in her head, she steals away in the middle of the night, just before her father’s Christmas feast.

Fearing for his daughter’s reputation, Henry Darlington begs Darius Hall, the Earl of Rushton’s daring yet discreet son, to bring Penelope home. When Darius finally catches up to Penelope, he is shocked. She’s not the silly little girl he expected, but a beautiful woman with a sharp mind and an allure that cannot be ignored.

Now forced to kidnap Penelope in order to bring her home, Darius and his new charge spend the next several days—and nights—in very close quarters. Penelope wanted passion and adventure, but she never could have imagined the pleasures Darius can provide…

‘Twas the Night Before Mischief is simply marvelous.  The characters are very well developed — especially considering the novella length — the story is interesting and well paced, and, perhaps most importantly, the romance is compelling.  My favorite thing about it is that the characters communicate imperfectly — Darius does not always understand what Penelope is trying to say, and Penelope frequently misunderstands Darius as well — but it isn’t obnoxious; actually, it feels natural, like how you’d expect two people who are getting to know one another to be.  As they spend time together, they get better at understanding.  It’s a fun little dose of reality in the middle of a historical romance novella.  I also loved the little details about Darius’ inventions and the nuances of Penelope’s relationship with her family.  All told, this is a fantastic novella, and I highly recommend it.

Next up is Jennifer Haymore’s His for Christmas.  I totally should have read the blurb all the way through (not just the first paragraph) before I read it.  I don’t think my opinion of the book would have materially changed, but I would have stopped expecting something a lot more interesting (and less straightforward) than what it is.  (It’s not necessarily an excuse, but you’ve noticed that blurbs are frequently lame and rarely give you an accurate idea of a story’s merit, right?  Anyway… sometimes I sort of skim the blurb, and sometimes I suck at skimming…)  Based on the first paragraph of the blurb, I was sort of expecting Lady Esme to appear as a character in this story, and I was hoping it would be super meta, with sections of Lady Esme’s erotic stories appearing in Esme’s own story.  I totally should have continued on to the 2nd paragraph.  But, seriously, wouldn’t that have been interesting? 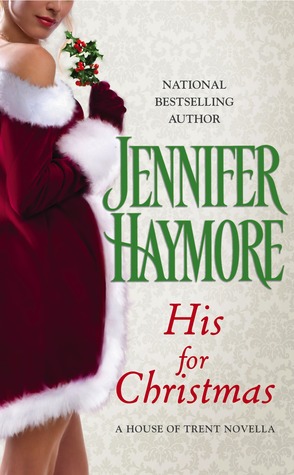 Cover image, His for Christmas by Jennifer Haymore

Society would never allow Lady Esme to share her own work, so her friend Jennifer Haymore is here to help—and just in time for Christmas!

His for Christmas is the steamy story of two travelers who find themselves stranded in an inn when an unexpected snowstorm blankets the English countryside. As the temperature drops, desire rises and the two strangers share a night of passion unlike anything either has ever experienced. When dawn breaks and the storm clears, will they continue on their separate journeys, or will they begin a new path together?

(Aside: just for the sake of my own sanity, I edited the above blurb, which I copied and pasted directly from Goodreads, to remove 3 spelling errors… “upexpected” “seperate” and “thier.”  In all honesty, if I had read the entire blurb, I would never have bothered reading the book, and that’s sad.)

His for Christmas tells the story of two homeward bound travelers, stranded at an inn during a winter storm.  These two were (sort of) childhood sweethearts until a sort-of-but-not-entirely betrayal forced them apart.  Now, with one recently widowed and one recently returned from a continental sojourn, they are able to discover the truth about the past and indulge in the passionate promise of the future.  The story was sweet, if a bit angsty, and I did actually enjoy it, but it lacked character development, and the story felt a bit rushed.  I know — it’s a novella, so I should be expecting those things — but novellas don’t have to live up to their reputation; they can, in fact, be perfect.  This novella certainly isn’t, but it does tell a lovely little story about forgiveness, trust, and sweet loving in a tiny bed.

And, finally, there’s Mistletoe and Magic a novella about a wackadoodle debutante, her gift of seeing the future, and the hero who inexplicably loves her (at first sight). 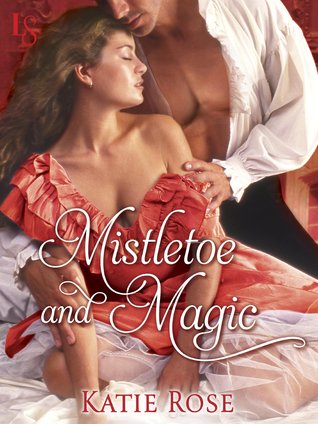 In Katie Rose’s delightful eBook original novella set in Victorian New York City, a remarkable woman with the gift of second sight must learn to trust her visions while following her heart.

Blond, angelic Penelope Appleton possesses breathtaking looks—and a troublesome secret. She and her two charming—and newly married—sisters have inspired quite a following posing as spiritualists. However, unlike her clever sisters, Penelope actually does glimpse the future. On the eve of her coming out at a Christmas ball, Penelope sees a vision of a rakishly handsome dark-haired man who she knows is her destiny. But her premonition comes with a terrible price: She also foretells his death.

Jared Marton takes one look at Penelope and his fate is sealed. He must possess her, heart and soul, even if his efforts to get close to this ethereal beauty are thwarted by her determination to deny the magic between them . . . until a perfect kiss dissolves all barriers to sweet surrender. But when Jared discovers the burden she carries, a perfect love is challenged by the cold winds of fate.

So Mistletoe and Magic goes like this: Penelope meets Jared and is all OMG, dreamy! but then she has a psychic vision of his death, and she’s like, OMG, Heartbreak? GTFO!, but, meanwhile, Jared’s like Whoa… I think I’m in love! I’d better buy her all the things! Penelope doesn’t actually want him to die, but she’s far more invested in preventing heartbreak, so she sends him an anonymous note: Be careful! You’re in danger! and then proceeds to act totally crazy around him, gazing longingly in his general direction one moment and telling him to GTFO the next.  Jared doesn’t care that she’s cray, though, because she’s got nice tits.

Eventually, Penelope realizes she needs to start telling people that she has The Gift, so she does, one by one, in a series of increasingly uncomfortable scenes.  Then Jared’s parents find out he’s courting the crazy girl, and they’re like Nope. Nope Nope Nope Nope!!! And Jared’s like Whatever, whatever, I do what I want. But his parents reach out to Penelope, and she’s like Love is all about self-sacrifice, and Jared could do way better than me. Ima go cry now. But then Penelope remembers a crucial detail about her original vision — a newspaper headline, complete with the date, announcing Jared’s death — and she knows she’s got to tell Jared, so she goes to his house, alone, at night, to warn him.  You totally know what happens next, right?  Yeah.  So then Jared’s like We’re totally getting married now! and Penelope’s like Babe, for reals, don’t go to the shops next to your office tomorrow. Like, for serious, some dude is going to shoot you! And Jared’s like, Aww, babe, it’s super cute how you’re all worried about me. I promise, I’ll be careful. But then the next day, he’s like Ima buy an engagement ring for Penelope at this shop conveniently located right around the corner from my office! And… yeah.  Have you heard enough?

It’s been a while (possibly since Secrets and Lords) since I read a book with such a squirrelly heroine.  Honestly, Penelope… you see a vision of this guy that you’re already convinced is your destiny getting killed, and all you can think to do is not get involved with him?  Really?  Like it’s going to be OK if he gets killed as long as you aren’t adversely impacted by it? Ugh.  And then, at the end, this other dude ends up getting killed in Jared’s stead (wrong place, wrong time, wrong coat) and everyone’s all LOLZ Jared’s not dead! but no one even spares a thought about the dead guy?  And readers are supposed to be satisfied when these two monumentally selfish (and stupid) people get their happy ending?!  Terrible.

*FTC Disclosure – I received e-galleys of all three books from the publishers via NetGalley in exchange for an honest review.*