A few years ago, I had this friend who was a little weird around all the menfolk.  She was a nice enough girl, to be sure, but, if there were any men within a 20-foot radius, she felt this bizarre need to be reassured of her sexual attractiveness by each and every man present, married or single.  It got to be a trifle annoying.  I didn’t understand what could drive her to such heights of ridiculous behavior that she would flirt with husbands in front of their wives in order to feel OK about herself as a human being.  Why not just be content with commanding the sexual attention of all the single guys?  Better yet, leave sex out of it when among friends.  But apparently When Harry Met Sally had it right–men and women can’t be friends because sex is always lurking around the corner, waiting for its moment to strike.

Is it delusional of me to hope that I have some sort of identity beyond my capacity for sex?  When I’m going about my business throughout the day, I don’t usually think about sex all that often (and, if I do, my sexy sexy thoughts are limited to my husband).  I don’t know if any of my coworkers find me a attractive, and I’d really prefer if my attractiveness (or not) had no bearing on their thoughts about me.  What the hell does sex have to do with my job scheduling a busy woman’s life, planning her travel, writing her correspondence, etc.?

It really bugs me, this idea that the root of all interactions between men and women is sex and that no amount of enlightenment can ever change that basis.  If a man wants to have sex with you (and every man does, we are told, although they’re happier about wanting to have sex with some women more than others, and if you fall into that latter category, woe betide you), that’s all he’ll be able to think about when he’s around you, and you’re powerless to stop it.  The other side of that coin is that, as a woman, your value as a person derives from sex, and you really have no identity beyond it.  So my friend and all her sexual posturing make perfect sense: she’s just trying to be a good woman, and everyone knows that a good woman is one who is desired by men (not a man but all men).  The whole concept is yucky, to me.

So why the hell am I talking about this is relation to a book?  Have I been reading feminist manifestos?  Nope… I read a bunch of romance novels this week, and one of them made me bleed from both eyes. 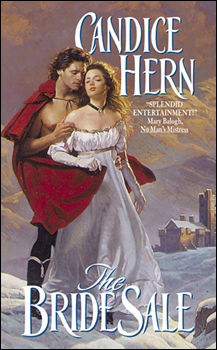 Oh god, the cover!  The snow lay on the ground, so why is Lord Hotness prancing around without a shirt?  Well, at least he grabbed a fancy-looking cloak in deference to the cold.

Ok… full disclosure… I bought this book because Avon (the publisher) sponsored a sale during the month of June on bride-related books (get the tie-in?).  $1.99 for a full-length e-book is a pretty darn good price, and the blurb sounded relatively up my alley (seriously messed up hero rescues the heroine from an uncertain fate… yada yada yada).  With a few reservations relating to the heroine’s apparent (to her) lack of identity (see rant above), I actually enjoyed the first 85% of the book, and then something happened to make me HATE it.  And I mean lots of hate.  Virulent hate infecting every part of me with an impotent rage.

I’ll do my best to steer clear of spoiler territory, here, but I don’t think the mystery relating to the heroine is at all important to the overall story line.  So here’s the deal.  The heroine was married by an arranged marriage to a gay man (not that anyone besides the gay man and his partner knew about that), and he, on their wedding night, was so grossed out by the heroine’s girl parts that he couldn’t do the deed and actually vomited next to the bed.  Isn’t that nice.  The heroine, who remained a virgin after all of this, didn’t know her husband was gay, didn’t know anything about sex, really, and was convinced that she just had some seriously nasty girl parts that would drive any man to cast up his accounts and then leave her alone in a moldering house for two years.  Totally reasonable, right?

Anyway, at some point her lame-ass husband realizes that he can make some money off of her, so he takes her to the wilds of Cornwall and sells her (that’s the Bride Sale) in an open auction where she is bought by the seriously messed-up hero.  The heroine assumes that she will be installed as his mistress (because what other value is there in a woman?), but he’s an honorable man, serious issues notwithstanding, and he does his best to treat her with the respect he feels she deserves.  Ordinarily, that would be wonderful, but his apparent lack of interest is enough to convince the heroine that she really is a worthless human being, even though she has skills as a healer, saves the life of a young boy, and eases all the medical complaints of an entire village.  Blah blah blah, and we get to the part that pissed me off, when it is revealed that, in fact, the hero does find the heroine very attractive.  All of a sudden, the heroine finds her identity and raison d’être, both originating in her value as an attractive female that the hero wants to nail.  Awesome.

And, I’m not kidding, the book devotes a lot of time to explaining the heroine’s happiness at being found attractive.  Considering that she’s just been kidnapped by her husband, has stood up for herself for the first time in, like, ever, then was rescued by the hero, and then discovered that her husband is gay and that there’s a chance she could get the marriage annulled, you’d think she’d have all sorts of interesting things to dwell on in her mind, but no.  The only thing she can think about is her relief to discover that her girl parts aren’t nasty.  Thank God!  Men want to have sex with me!  That means my life will be perfect!  UGH!!!  Or, for the actual quote:

“Verity was so overcome by this revelation she was almost unable to breathe.  Of all the astonishing events of the last day–Gilbert’s arrival, James’s rescue, the possibility of an annulment, this exquisite lovemaking–nothing affected her as profoundly as this new knowledge that she was not, after all, defective in some way, undesirable to men.”

Note that Verity is concerned about her desirability to men.  And half-a-page later:

“In the space of a moment, she was a new woman.  The man she adored found her beautiful and desirable.  The pride she would now wear would be real and true, no longer a mask for shame.”

Do you want to know how angry that one page of the book made me?

Out of a sense of fairness, I gave the book 2 of 5 stars on Goodreads, because the story elements that did not relate to Verity were all very good.  In fact, I really liked everything else about the book, but this one thing totally destroyed it for me.