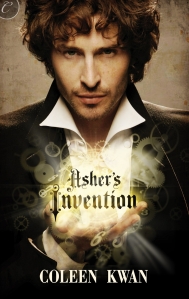 When I saw the description of this book on NetGalley, I thought, yeah, that’s pretty much up my alley.  It’s set in the Victorian era, and it’s a steampunk romance.  Honestly, they had me at “…prototype for a wondrous device…”  I’m a sucker for devices of all sorts.  Anyway, here’s the description from the publisher:

Five years ago, Asher Quigley broke his engagement to Minerva Lambkin, believing she was an accomplice in a scheme to steal his prototype for a wondrous device. Minerva swore she was innocent, though the thief-and Asher’s mentor-was her own father.

Now, sheer desperation has driven Minerva to Asher’s door. Her father has been kidnapped by investors furious that he’s never been able to make the machine work. Only Asher, now a rich and famous inventor in his own right, can replicate the device. He’s also become a hard, distant stranger far different from the young idealist she once loved.

Despite their troubled past, Asher agrees to help Minerva. He still harbors his suspicions about her, but their reunion stirs emotions and desires they both thought were buried forever. Can they rebuild their fragile relationship in time to save her father and their future together?

True to form, I loved all the gadgets and inventions, however implausible they might have been.  There are airships and nifty prosthetics and mechanical dogs and ray guns (!!), and, of course, there’s a “wondrous device.”  I loved that the author didn’t waste a lot of time explaining the devices but left that up to the reader’s imagination (maybe my version of a Viper Ray gun differs from Coleen Kwan’s version, but who cares?).

At about 94 pages (depending, I suppose, on one’s e-reader formatting), this book weighs in as a novella.  As such, it’s short on a lot of the story and character development that you would expect from a full-length novel, but there was still enough of a story to keep my interest, and I think it stands as a fairly strong example of ideal novella formatting and pacing, even if a lot of the story and character elements annoyed me.

I didn’t care for Asher very much, his inventions notwithstanding.  I had a difficult time connecting to him as a character, and not all of his actions made sense (particularly at the end… goodness); about halfway through the novella, he does a 180, and there isn’t enough of an explanation given to render it seamless.  I liked Minerva, and I liked how her character developed over the course of the book, but, again, it was a bit choppy, as though she developed in fits and starts, with huge changes taking place in the space of a moment rather than gradually.  This issue may be due to the space limitations of the novella format (what do I know?).

For a steampunk romance, I didn’t find it terribly romantic.  Asher’s kind of a jerk, and his big “finally not a jerk” moment isn’t given enough time and space to resonate with the reader.  The author (as the narrator) mentions twice how abrupt and strange his about-face is to Minerva, and I was left wondering why, since Coleen Kwan obviously noticed how abrupt and strange it is, she just left it that way.

Finally, it both amused me and irritated me that the author repeated herself a few times about some really strange things.  Minerva has some issues with vertigo, and I know this because the author mentions three times in the space of one scene (in the airship) that Minerva’s “stomach did another queasy tumble,” and that her “stomach was still rebelling,” and that she “had not yet mastered her stomach.”  If it’s absolutely necessary that the reader know about how Minerva’s stomach is doing (and I don’t think it is.  Minerva’s motion sickness doesn’t further either the story or her character development, so why should I, as the reader, care about it?) one mention would have been adequate.

Overall, it was an interesting story but it didn’t quite make it to my ‘i liked it’ list.

*FTC disclosure: I received a free e-galley of this book from Carina Press through NetGalley in exchange for an honest review.*