I was a little bit light on reading this week.  I spent so much time writing posts and checking out other blogs (and commenting) during Armchair BEA that I didn’t read as much during the day, and I barely read at all this weekend (all that gardening!).  All told, it was a bit of an indifferent week in reading.

Yeah, I read it.  I don’t really get the Texas thing, but there are a butt-ton of romance novels dedicated to cowboys and/or folk from Texas.  Don’t get me wrong,Texas is A-OK with me, and I’m certainly not messing with it, I just don’t get all kinds of excited about books set in Texas.  But it was free, and I was curious.  My favorite thing about this book is the little kid, even though she totally has a trailer-park name (Sammie Jo).  The kid is 15 months old at the start of the book, and although it’s tough to track the passage of time across the length of the book, I suspect she’s about 17 months old at the end of the book.

I have a 3-year-old and a 16-month-old, so I was automatically drawn to Sammie Jo, and I really think Hestand nailed her portrayal of the toddler.  Maybe I wouldn’t have even noticed this sort of thing before I had kids, but it really bugs me when authors include kids and then get all the details wrong.  12-month-olds can’t jump.  Seriously.  Babies who are just starting to talk can’t hit final consonants and can’t properly enunciate combination consonants “br,” “sl,” etc.  Hell, my 3-year-old still can’t do any of that stuff (all combination consonants become “f” for some odd reason…).  So I was beyond thrilled to meet Sammie Jo and discover her doing things an actual 15-month-old would do.  I was also charmed by the relationship between Emma, Sammie Jo’s guardian (and the actual main character of the book…), and the little girl.  Actually, I loved everything relating to Sammie Jo in this book.  All of the characters responded to her exactly as you’d expect, from the grandpa-like older man to the ‘gonna-be-very-good-dads-one-day’ brothers of the main male character.

I didn’t like very much else about the book.  The pacing was strange, and the character development left a bit to be desired.  If the book didn’t keep on telling me how attracted the main characters were to one another, I’d never have guessed.  It annoys me when a narrator has to tell me what’s going on rather than my finding out through action or dialogue.  The ending was rushed and awkward and didn’t really tie-up all the loose ends. And, seriously, it ends at a cow birthing…  Maybe that’s totally sexy to people who get the whole Texas thing, but it just irritated me. 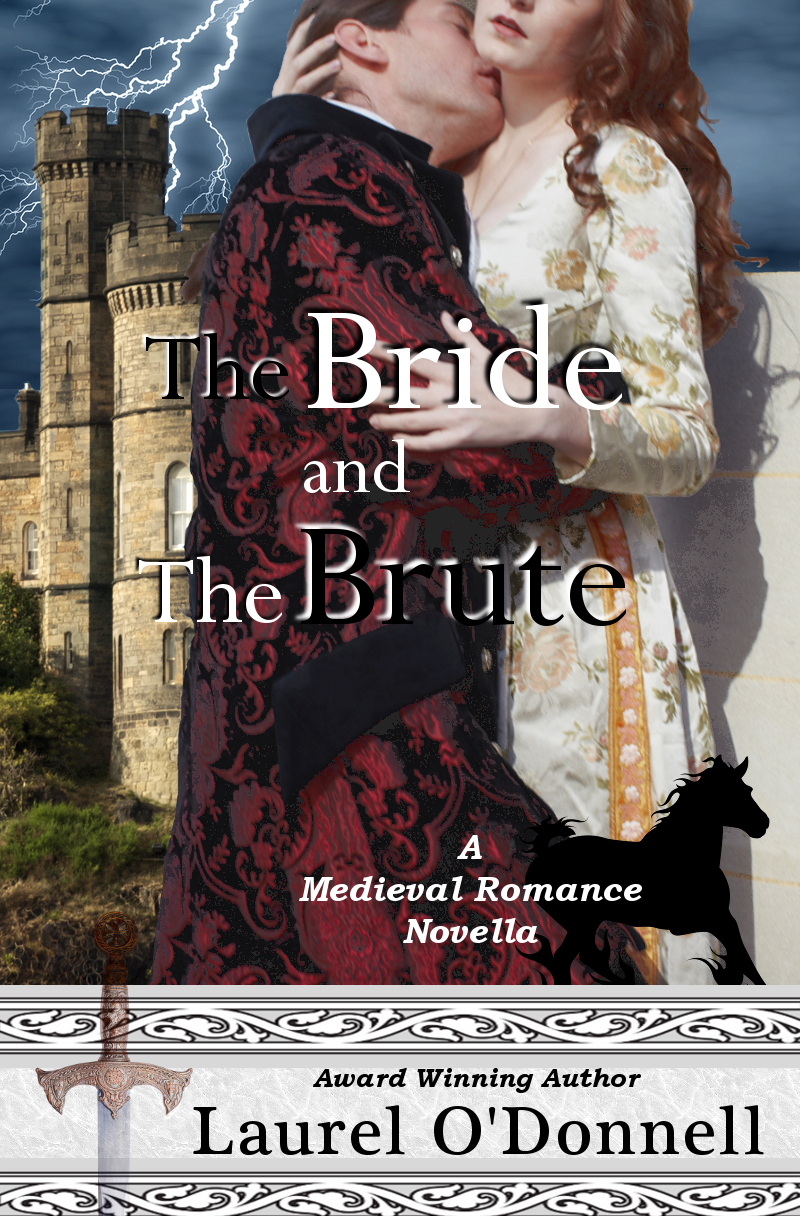 Awesome cover image, The Bride and the Brute by Laurel O’Donnell

Just had to show this cover full size…  I love the lightning-struck castle.  My remarks on this book require a preface: it’s a novella, and it was free.  Most of the novellas I’ve read have been terrible.  You get the idea while reading them that the author started out hoping to write a full novel and just didn’t have enough story (or time).  They don’t have to be bad (Once Upon a Winter’s Eve by Tessa Dare was pretty great), but they usually are.  This one was pretty bad, but not for the usual reasons.  It was obvious that this book was designed from start to finish to fit within novella length, so what went wrong?  Well…

1.  In a book set in England in 1392, I was a bit surprised to encounter characters named Jayce, Reese, Nicole, Morse, and Dylan.  Jarring, that.
2.  Reese, the male character, is a prize asshole for most of the book, and I just didn’t feel like rooting for him when he finally decided to overcome his own issues and chase down his girl.  And, in a novella, it shouldn’t have felt like “finally,” but it did.
3.  Jayce, the female character, is almost completely flat.  She really only has two character traits: she’s afraid of storms, and she feels strongly about the correct way to break in difficult horses.  I am not kidding.

So why did I keep reading it?  Honestly, when you’re reading a book that’s so short, there’s no reason to DNF the thing, and usually a sick curiosity comes over me.  I want to find out what happens at the end.  The Bride and the Brute rewards you for your patience (ish… it depends on how you define reward), and that was enough to make me glad I finished it.

Cover image, One Week as Lovers by Victoria Dahl

I finished this book last Monday, and I think I’ve decided that I liked it, but I had to overcome some reservations in order to reach that conclusion.  I do recommend it as an interesting and somewhat edgy romance novel (that’s an unusual word combination right there… when was the last time ‘edgy’ was associated with the romance genre?), but it’s fairly intense and probably wouldn’t suit everyone.  I’ve mentioned before that I enjoy it when romance authors push the envelope with their characters and give them real problems to deal with.  Dahl did that with both of her characters, particularly Lancaster, the male character.  Part of the fun of the book is slowly uncovering all his issues, so I won’t go into any of that.   (I felt like a total voyeur when I was reading this book, but it was very interesting to put together the puzzle of his behavior with the knowledge of what caused it.)  Suffice it to say that both characters are lugging around a metric-ton of baggage, yet the writing doesn’t suffer from all of that emotional weight.  The characters are well-written and their choices and actions make sense given their experiences.

Anyway, the real problem I had with the book was the sex scenes.  I get it: if you have characters who have both suffered sexual trauma of some sort, you’re going to end up with somewhat messed-up sex scenes.  They make perfect sense, but that doesn’t mean that I enjoyed reading them.  There’s zero comparison between One Week as Lovers and Fifty Shades of Grey, really, but I am even less inclined to read the latter now that I’ve read the former. If I had such a strong reaction to the relatively mild stuff that happens in One Week as Lovers, there’s no way I’d be able to get through Fifty Shades of Grey.

3 thoughts on “This week in reading…”